Milica in the Hat 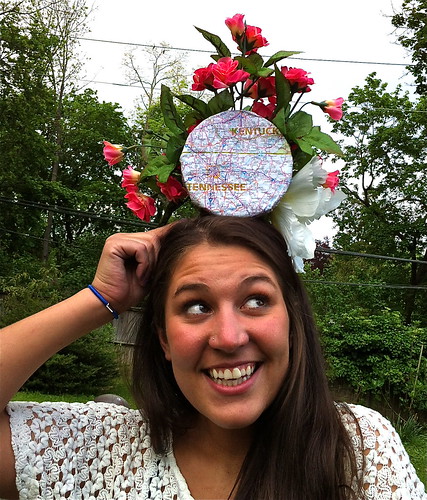 >>Milica Schiavio:  My hats are very nature inspired. I love being outdoors so I try to use a lot of organic elements. I definitely went through a fruit phase. I used plastic apples, plastic pears. This one right here for example, is mounted on a suede headband and it’s packing material, egg cartons and all sorts of green elements.

>>CLOSEUP: And where would someone wear a hat like this?

>>CLOSEUP: So the horses compete and the hats compete too?

>>Milica: Yeah, they do in the chapeau contest. It’s fun. I love to make people smile. I think women have a really good time when they wear my hats.  People approach them, talk to them…. That’s a fascinator. So it’s Styrofoam in the middle with paper and just acorns and green moss.

[Trying on hats, posing for camera]

>>Milica: The name of my website is  Milica in the Hat Millinery dot com and it’s milicainthehat.com. You can also go to my Facebook page where there’s a lot more photos. 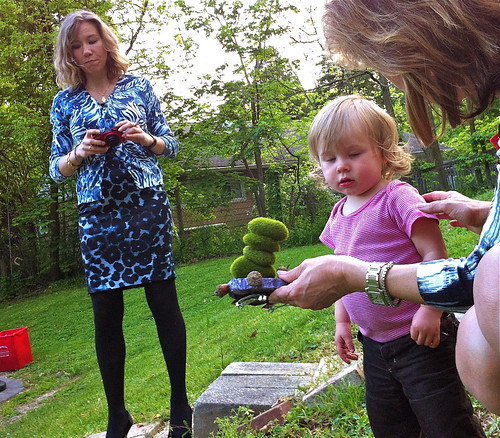 Milica's neice looks at one of Milica's fascinators 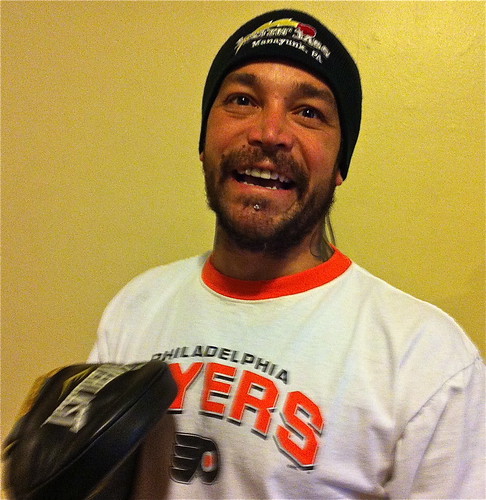 So I’ll have her hitting uppercuts over here.  I’ll have her do a little bit on here. This is for slipping. Hand and eye coordination. Slip, slip, roll, counterpunch, OK? I’ll have her on the speed bag. [Hits the speed bag] I’ll have her hit the heavy bag. That was the uppercut bag. That’s where uppercuts and hooks go. Of course you start off with your jab.  A jab is your range finder. On here is your straight punches. You can jab right handed,  left hook and you don’t really throw uppercuts here but you can throw body shots.  Sit on your punches as you go.  And the focus mitts. She’ll have a pair of gloves on and I’ll be here. After I’ve already worked with her and showed her how to punch correctly. How to shift her weight. She has proper balance and weight distribution. And then I would just hold the punch mitts and she would punch I’d counter with some wild hooks and she’ll just roll, come back and counterpunch me.
Joey DeMalavez, Owner/Trainer, Manayunk, Philadelphia. 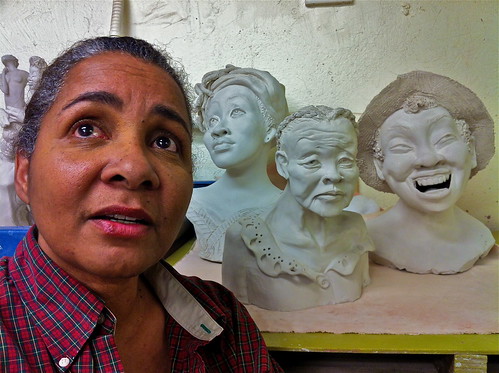 Nancy-Ellen sculpted characters from her book “Nana’s Wicker Back.” The title references the scarring pattern on her own grandmother’s back from whippings as a slave. “These women are bought and sold [many were bore] into slavery who were regarded as mules or just property. Yet I wanted to depict that they had spirits, they had souls, they fell in love, they cried and some were very overt in personality some were very quiet and timid. And I never know what I’m going to make. As I start pushing clay, they start telling me who they are.” Nancy-Ellen. Watch video interview here 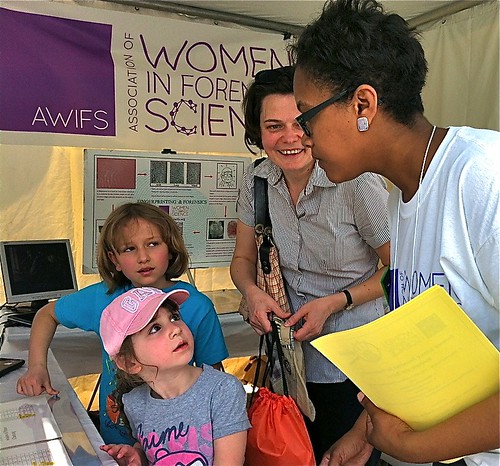 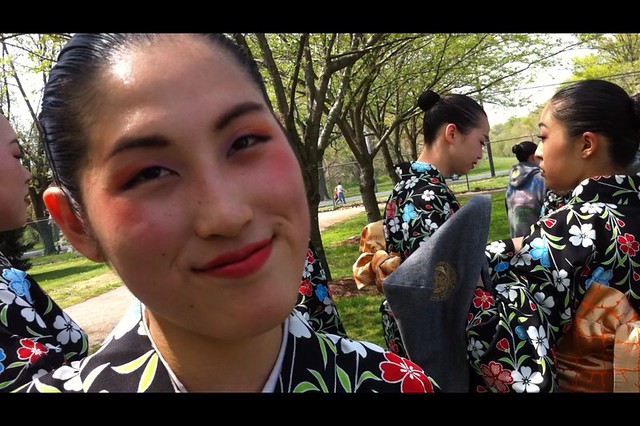 A Tamagawa Taiko and Dance Troupe member describes what it's like to dance with the troupe at the Sakura Japanese Cherry Blossom Festival, Fairmount Park, Philadelphia. (Awaiting a translation...) Watch video here

How would pro-life student regulate abortion? 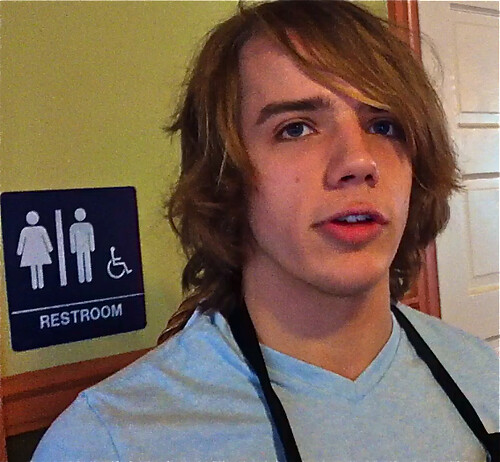 A student who attends a Christian high school describes himself as "pro-life" and ponders how he would regulate abortion.

I had off because I didn’t have a midterm test at school. I came in to work, 10:30 and after I’ll go sit down somewhere and study for the exam. WHAT’S THE EXAM ON? History, U. S. History. AND THIS IS AT..? Philmont Christian. AND WHAT ERA OF U.S. HISTORY DO YOU HAVE TO KNOW TODAY? It actually goes from the creation of the Constitution to modern day so we learn about cases and amendments, that stuff. DO YOU TALK ABOUT ROE V. WADE IN AMERICAN HISTORY CLASS? Yeah that’s one of the cases. WHAT DO YOU UNDERSTAND ABOUT THAT DECISION? Which one is that, again? THE ROE V WADE RIGHT TO ABORTION DECISION? I’m definitely pro-life. I’m against abortion. A small percent of circumstances like rape and stuff like that obviously is really tough, a tough call but I think that even if someone isn’t born, the life is still important. HOW DO YOU BELIEVE THAT SHOULD BE REGULATED? It’s tough to say. I’m not sure, yeah, I’m not sure. Brett Steiger of Abington, Cedars Café, Forbidden Drive and Northwestern Avenue. Watch video here. 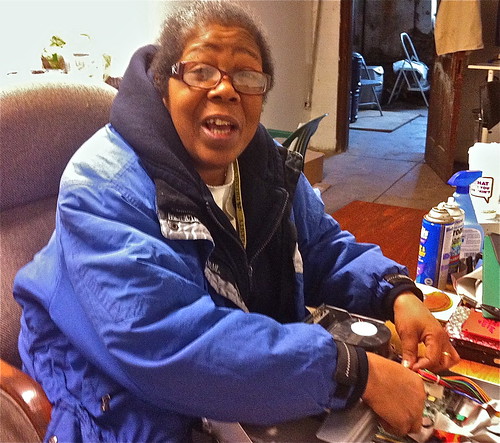 I’ve been retired now for about twelve years.  And ever since I’ve been retired I’ve wanted to do something. I’m not a lay home watch soap opera kind of girl.  I ran into a place called non-profit technology resources down near Spring Garden and Stan introduced me to recycling. And what I do is the donations that have come into the YWCA where I started and Malt Computer Volunteer Group, with the donations that come in, they were just sitting around. So I decided to tinker with and fix them.

As of the past four years we’re a Microsoft authorized refurbisher. We’re licensed by Microsoft to refurbish computers and install licensed products. Because we’re an authorized refurbisher, that means I’m obligated to wipe any and all hard drives. So I can assure people if they want to donate it or someone comes in and says I want to donate and I want my data, I’ll open the computer up and pull the hard drive out and hand it to them. Because when I re-image it, it has to be wiped. I have other hard drives.

You used to be able to put computers out on the sidewalk. Now you can’t do that. Also industries can’t dispose of their computer equipment the way they used to. So they donate it. They say you come get it. No you drop it off because I know they’re saving money (plus they’re getting a tax deduction} because they don’t have to pay for disposal.

My concern is since I’m a grandmom my concern is with schoolchildren, middle school through high school and college students. When I get donations of laptops, the college students are first on the list AT REDUCED PRICE? At minimal price. Especially a high school student who comes in and they’re honor roll. They get a whole PC for twenty bucks. AND HOW DO THEY FIND OUT ABOUT YOU? Usually word of mouth. Everybody knows “Miss Wynnie, the computer lady.” Wynne Hill, Summit Presbyterian Church, Mount Airy. 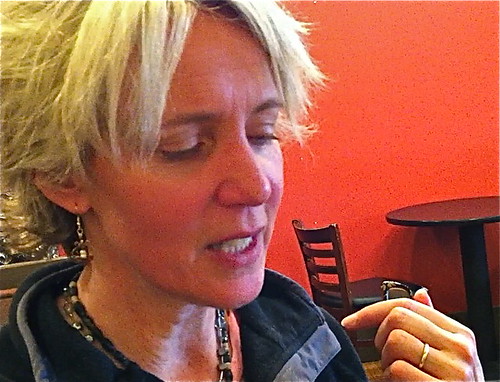 “’Nobody dies at the end of this book. Try not to let this fact mislead you. As far as my Mother is concerned, it is important to distinguish between what death actually is and what it isn’t. There’s a body and there’s a soul. One dies, the other doesn’t, ever. And then there’s how I feel about it, which is complicated.’”

“My name is Susan Morse and I have written a book called, “The Habit” which is the story of my Mother who at age 85 in the middle of a health crisis which I was shepherding her through the medical system, became an Orthodox Christian nun. And it’s the story of our relationship…

She was on a quest. She was spiritually hungry her whole life. In the 1940s during the wartime she met my father and married him just as many people did -married a man who was about to go off to war. It was a relationship that was never really a true, passionate romance and there was a lot of trouble there. But they stuck it out. They raised four children together and end up actually quite content with each other by the end.

After the kids moved, out she started experimenting with lots of different religions and kept changing, Episcopalian to Roman Catholic to a different kind of Roman Catholic back to Episcopalian, all these different things. And she’s an artist and at one point she began taking these workshops painting Byzantine icons. And that is something you have to pray when you’re doing it, the workshops tell you.  The whole system is really, really strict technique. And she discovered that her icons which she was feeling very satisfied with the process of doing those, were not legitimate in the Orthodox Church because she was not an Orthodox Christian.

My Mother really believes in- if you believe in something you really have to throw your whole self into it. So for her to be a Christian is not enough. She needed to go all the way.

She says now she dreamt about being a nun from when she was a little girl. She was 85 when she became a nun and she was frail. There was no question of her taking on a job. For the frail and elderly ones – she became, literally, she’s called a ‘house nun’, which means she stays in her house, and she prays. And that’s what she does!”

Susan Morse, reading from the preface to her newly published book, “The Habit.” Morse will be reading from her book on Wednesday, January 25th in the Bombay Room at the Chestnut Hill Hotel and on January 26th at Headhouse Books in Society Hill. Both events are from 7:00 to 8:30. 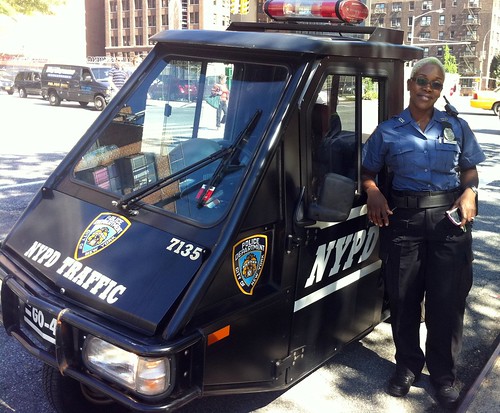 Posted at 09:07 AM in Public Safety, TRANSPORTATION, WOMEN | Permalink | Comments (0) 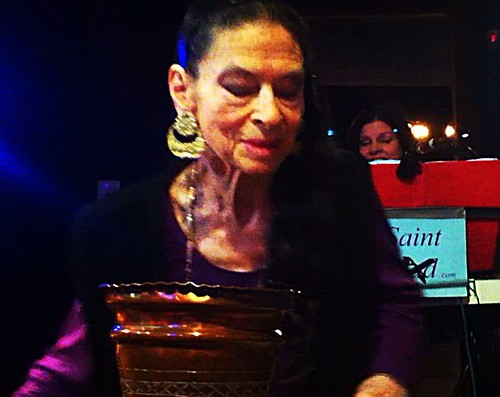 Audrey Bookspan of Wyndmoor is a longtime local dance teacher and performer. She once performed with the the Martha Graham Dance Company. She has been the percussionist with Jim Harris and Saint Mad since July 2010. They perform every first Friday at Crossroads Coffee House in Roxborough. Here she taps to "Nice and Easy Does It Every Time." Watch video here