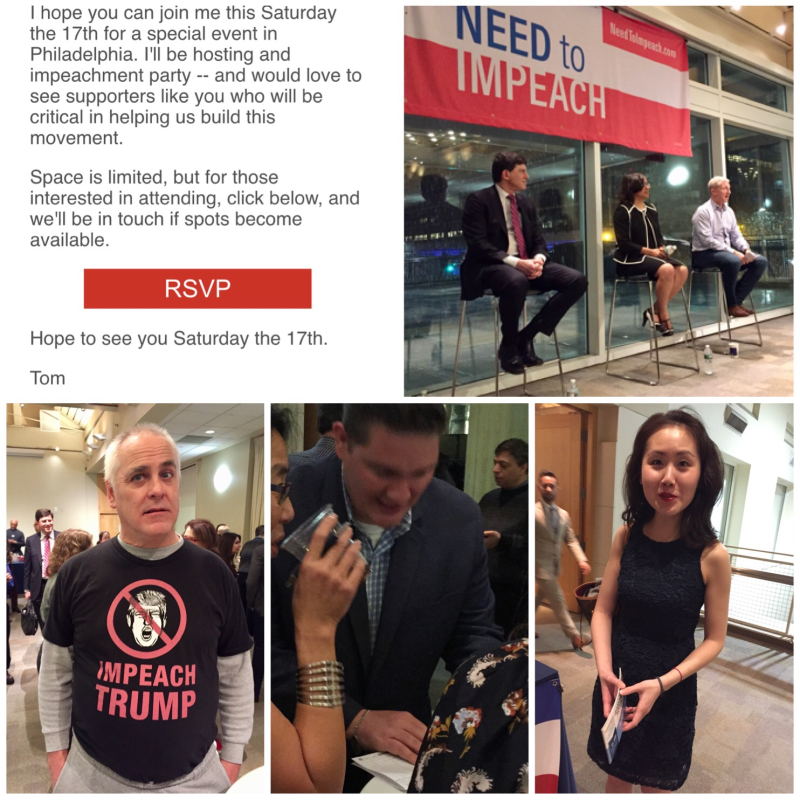 Your correspondent, a reliably strident protester of former candidate – now President Donald Trump, signed an online petition earlier this year calling for Trump's impeachment. This past week I received an email invitation from Tom Steyer at "Need to Impeach" inviting me to "and [sic] impeachment party", space permitting. The invite didn’t explain at all what would happen at the party but I sniffed free food. Sure, I would "stand with Tom" as other emails asked me to do. Steyer turns out to be a billionaire former hedge fund manager turned born-again environmental activist and Democratic Party candidate funder and fundraiser. I adhere to the credo that “behind every great fortune is a crime,” so it didn’t take long to find an academic critique of hedge funds that concludes they provide no social value and while they provide returns on investments no better than average they do make some managers extraordinarily wealthy. ​

In a subsequent email we were instructed to arrive at the Liberty View Ballroom at the Independence Visitor Center in downtown Philadelphia with photo ID. We arrived. The other partygoers were mostly middle aged and white like us but much better dressed. We were ushered into a room with waiters walking about offering hors d'oeuvres and an open bar! I schmoozed and conducted some interviews

I engaged Paul Shrader, a tall man with an “impeach trump” t-shirt, the only one I spotted sporting political attire. He was an ATF-Explosives certified military man who felt it wasn’t appropriate to continue service in an administration where 130 people in leadership positions do not, according to him, have security clearances. Working with the enemy? he asked disbelievingly. That’s the number one thing you don’t do and that the administration has been doing.

I also interviewed Lindy Li and Rich Lazer, both young idealistic Democratic candidates for Pennsylvania’s First Congressional District. The map was redrawn just today by the Pennsylvania Supreme Court to correct court found Republican Party gerrymandering. Li, who came to the US from China when she was 5 years old, was propelled into politics when a shooter killed children at the Sandy Hook Elementary School in Newtown Connecticut on December 14, 2012. The date happened to coincide with her birthday and, in her words, damaged her “eternally.” She is vehement about diminishing the influence of the NRA in gun control matters and big oil on environment, climate change matters. Lazer had just resigned his position as labor liaison for Philadelphia Mayor Jim Kenney and opposes Trump‘s measures clamping down on sanctuary cities and calls for Trump’s impeachment for obstruction of justice in the FBI’s investigation of Russian state operatives’ interference in the 2016 presidential campaign and possible collusion with the Trump campaign. I also saw candidate Nina Ahmad who smartly drew attention to herself with a sign with her name on it.

Steyer eventually took a high seat at the front of the room alongside Pennsylvania State Representative Donna Bullock who spoke about how her constituents were being damaged by both Trumps policies and his manner. Seated at her right was Baltimore psychologist John Gartner who has been making the case that Donald Trump suffers from deteriorating pre-dementia and malignant narcissistic personality disorder. He speculated Trump might find relief, vindication and perverse pleasure in starting a nuclear war.

Steyer followed with remarks abut the need to energize college students to participate in the midterm elections. When he couched the situation as one of "absolute" right versus wrong, your correspondent impolitely rose before the third and final question that had been chosen from ones earlier submitted by attendees, to question Steyer about his extraordinary wealth. Steyer promised to be transparent. Considering how unrevealing he was in the party invitation, that’s a good thing.