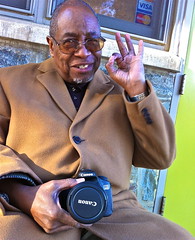 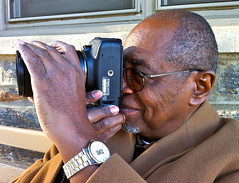 Garland Thompson was monkeying around with a large camera on the bench just outside the Allens Lane Art Center when, as I was about to go in, I paused to talk with him. Thompson who took his first photography class at Allens Lane 42 years ago, is a professional journalist. He had just recently purchased this, his first digital camera, and was saving the first shot to capture his grandson’s two year-old birthday celebration that same day. Soon he would be traveling to Panama from where he will report for the Philadelphia Tribune and WYRP radio in Baltimore.

YOU’VE BEEN DOING PHOTOGRAPHY SINCE… Since 1969 when I learned here at Allens Lane Art Center with a photographer named Larry Kanefsky. He taught us how to do the lab stuff as well as composition tricks and all kinds of nice stuff. OK, so this is my camera, it’s a Canon single lens reflex camera. I bought it because it is an SLR Seeing is the difficulty with a camera rather than hearing (oops, let me get the dot) You can tell I’m not real familiar with it, I just got it! (There we go) I bought this camera so I could shoot my grandson but also because I’m going to Panama. I’m going to be doing some reporting for WYPR radio in Baltimore and, among other things, I helped to convince them that radio in the Internet age is really TV, and they had to do pictures. too. So I’m going to do some stories for them and also bring back some stories for the Philadelphia Tribune, one of my old papers and, some probably who knows, some will be souvenir shots. So that’s my big thing. I bought this camera so I could get back into photography which I used to truly love ‘cause it’s so fascinating. Now I’m really quite fearful that it’ll be too absorbing. So that’s my story. YOU’RE GOING DIGITAL TODAY? I’m going digital today. AND THE FIRST THING YOU’RE TAKING WITH THIS YOU SAY IS? My grandson Joshua Monk is two this week and we’re having a celebration for his birthday. So I’m going to go, be grandpop, and shoot his pictures. HAVEN’T SHOT A SINGLE THING YET? No, I haven’t shot the first thing. I’ve been very careful to not shoot anything so that Josh is the first thing I do. Journalist and author Garland Thompson.

Epilogue: “What I like about it is it has a diopter adjust. I can actually look through this camera and not use my glasses There’s a diopter lens adjustment."