The annual Mount Airy Village Fair centered around the Greene and Carpenter Street intersection in the Mount Airy section of Northwest Philadelphia featured a variety of vendors and organizations and exhibitors. It was full of  food, music, dance, crafts,  family and children's activities, contests, pets for adoption, farm animals (watch recorded Periscope broadcast here) and more on a sunny Sunday, September 11, 2016. Here are a couple of video interviews conducted by your Fair going correspondent. 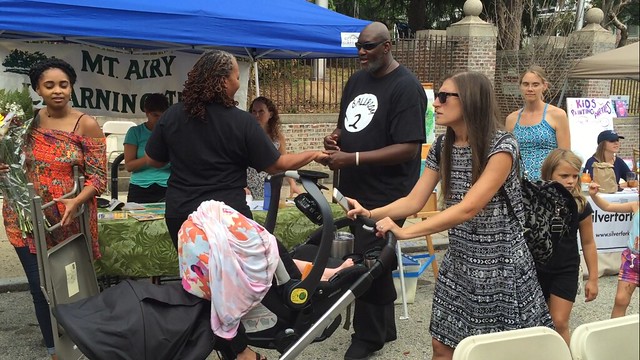 June and Audrey Donaldson learned Detroit Style ballroom dancing at a dance conference in Cleveland in 2010 where they were teaching Philly  bop.  June relates that the style  originated in a very large ballroom in Detroit called the Graystone. The dancers move smoothly and closely and incorporate the "step-in-1-2-3" of the cha-cha. The self-called "Bopologists" have been teaching Detroit style ballroom ever since and were dancing out on the street during the annual Mount Airy Village Fair in Philadelphia to promote their course through the Mount Airy Learning Tree. Watch video here. 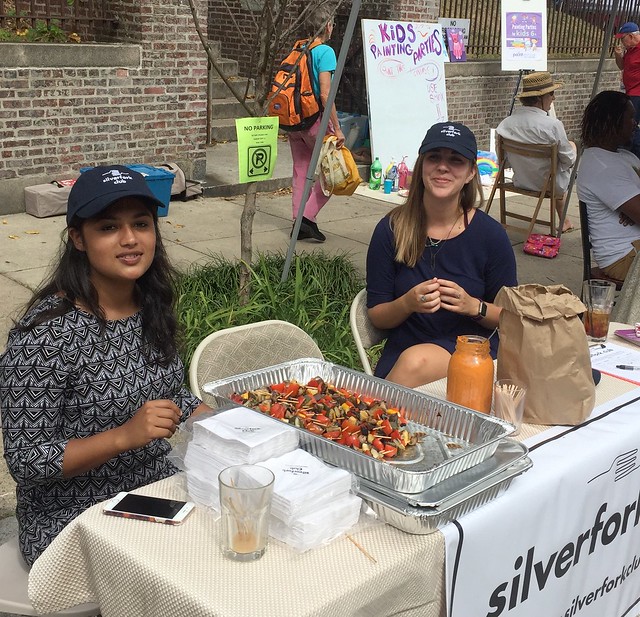 Through the Silver Fork Club's online presence, eaters too busy to cook can browse the offerings of local chefs and have a home-cooked meal delivered to them or arrange for a pick-up. Young ambassadors at the Mount Airy Village affair offered free cooked veggie skewers to promote the service's imminent Philadelphia launch. Watch video here. 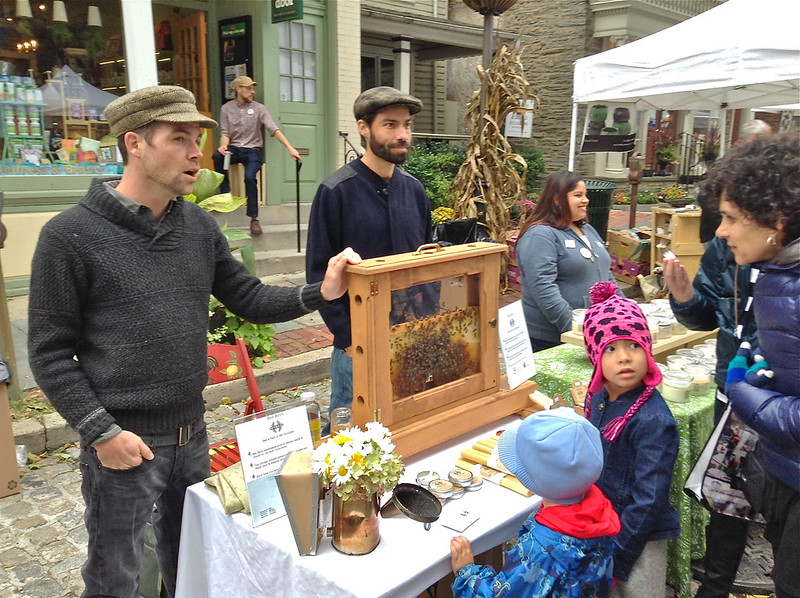 Bee Boy  Ryan Williamson is happy for any technology advancement that raises the profile of beekeeping but has reservations about the so called flow hive with preformed plastic combs. New beekeepers who think all they have to do is turn the handle and out will come honey risk harming the bees. He also believes that comb building is in the bees' genetic coding and something that they are meant to do and is good for them. The Bee Boys  are organic beekeepers whose simple mission, according to their website  is to support the honeybees! At the right in photo is Bee Boy Kevin O'Connor. Watch Video here.

Helen Ambrose watches construction progress of The Fresh Market store and condominium complex in Chestnut Hill with mixed feelings. A few years ago Ambrose and her neighbors were commiserating about how dead the Germantown Avenue corridor seemed.  She is worried now about the increased traffic the development will bring but still welcomes it. She patronized The Fresh Market store when she lived in North Carolina. “They have amazing meats, seafood and specialty foods,” she says and welcomes more shopping options. She also shops at Trader Joes and Weavers Way Coop and really likes the Chestnut Hill Farmer’s Market (now “Market at the Fareway”) which she hopes can “hang in there.”  Watch video interview here.

Posted at 12:31 PM in BUSINESS, Food and Drink, STORES | Permalink 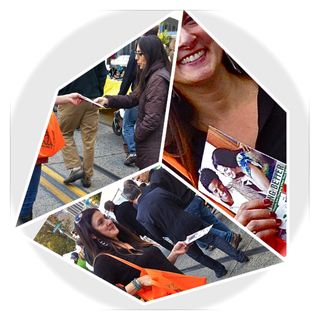 At the Chestnut Hill Fall for the Arts Festival, a Humane Society advocate asked people to try going “meatless” on Mondays as a step toward ending the keeping and killing of animals for their meat. Short video interview here. 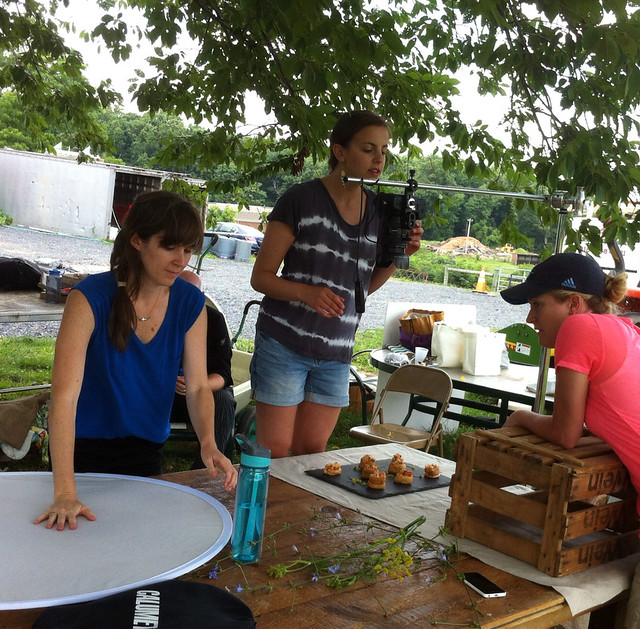 Kira Luxon assists Courtney Apple on a photo shoot under the eye of Laura Shoup at the Henry Got Crops Farm in Roxborough for Jeffrey Miller Catering which does many farm to table events. Watch video here.

Posted at 10:24 PM in Food and Drink, Photography | Permalink

Four homeschooled girls are selling snacks and cold drinks four days a week outside the Andorra Shopping Center in Roxborough, Philadelphia. They have been doing this for the last ten weeks. Watch video interview here. 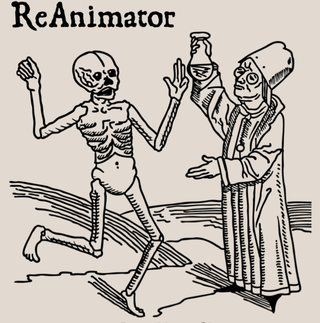 The images on "ReAnimator Coffee Roasters" bags of a skeleton reaching up with a bony hand to perhaps clasp a flask containing some potion held high up by a priestlike figure come from old wood etchings. The name "ReAnimator" is taken from the HP Lovecraft story, "Herbert West - Reanimator," about a doctor who experiments with bringing the dead back to life through ingestion of reagents. Sleep, a state akin to unconsciousness may be an analog for death, a barista at the outdoor Clover Market in Chestnut Hill philosophizes and a workmate adds that coffee drinkers love the revitalizing effect of caffeine. Coffee "reanimates" them.

Lillian Bijl (left) and Tara Bucci, Mt Airy USA interns, are going around the neighborhood stapling up posters for the popular “Moonlight Movies” series this summer. Starting with an outdoor showing of “Frozen” at 8:30 pm on June 20th  in the park adjacent to the Lovett Library at Germantown and  Sedgwick Avenues , the series continues on Fridays there, and on Saturdays next to the Trolley Car Diner. At Lovett, moviegoers may patronize “Dining under the Stars” food trucks or bring their own picnic dinners. Mount Airy USA, Trolley Car Diner, the Free Library of Philadelphia, Valley Green Bank  and a certain big box store sponsor the  popular series of mostly G and PG rated films through August 16th. For more information, visit http://gomtairy.com/events/moonlight-movies-in-mt.-airy.html.

Not her household's usual shopper, Barbara Collom of Mount Airy confronts the baffling array of product choices for any one brand at her local Pathmark Supermarket. For instance, she opts for Gatorade X-factor but wonders what Gatorade Fierce had to offer instead. Watch video here.

Posted at 01:11 PM in Food and Drink, SHOPPING | Permalink

Eating energy bars made from crickets

Weavers Way Food Coop has introduced a new line of energy bars  - ones made with crickets.

Jon Roesser and Lara Cantu- Hertzler appeared pleased with the bar’s coconut-ty, gingery taste. Roesser noted that cricket flour was listed as the fourth ingredient and figured (correctly) that it served as the bar’s protein source.  Cantu-Herztler was a little queasy about eating insects but thought it was a good idea.

Rick Neth hadn’t seen the product before but reported that in his native Cambodia, insects are sometimes eaten in certain regions.  Farm raised crickets might be baked, used in stuffed, roasted peanuts, or fire-roasted.

On its website, the Chapul company is asking people to join the other 80% of the world’s population who, it says, regularly consume protein-rich insects as part of their diet, and effect a revolution against traditional land-and-water intensive, polluting agriculture.

At the conclusion of the accompanying video, staffer Joe Stanton is mulling over a mouthful.