Going solar with car and house 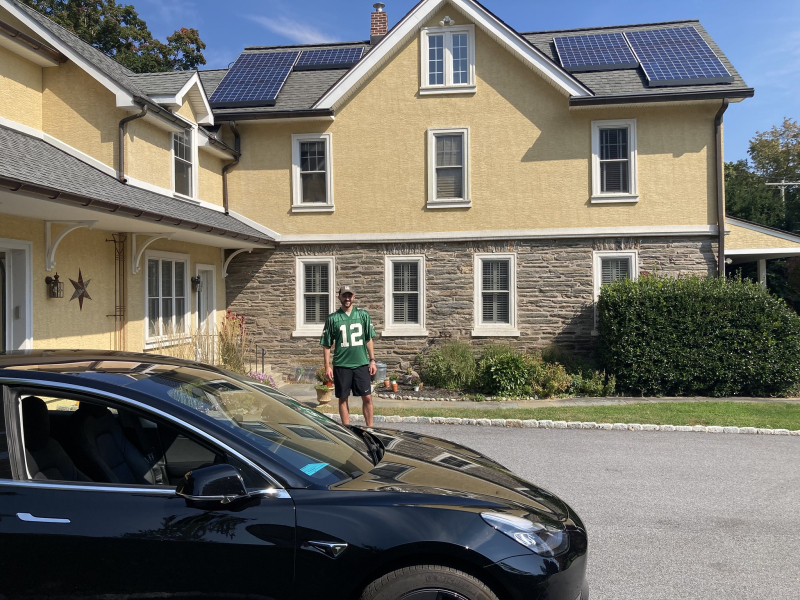 A renewable energy advocate and practitioner, Aaron Stemplewicz showed off both his house and his Tesla Model 3 for the National Solar House Tour on October 3, 2021. On multiple sections on the roof of his house in Wyndmoor, Pa he has a 16 panel, 5 kilowatt hour system. In 2016, he entered a Power Purchase Agreement with Solar City (now part of Tesla.) It cost him nothing to install or maintain. Now he is exercising his contract option to purchase the system outright. He has crunched the data and figures the purchase will make money for him eventually.

Next year, he says, Volkswagen, Hyundai and other manufacturers are introducing electric cars with bidirectional batteries. These big batteries will be able to act as backup power to a house like his . (His current Tesla has only a grid to car battery.) He advises people who are thinking of getting battery backup for their house to wait and buy such an electric car if they can swing it. The upfront cost of an electric car is much greater but Stemplewicz did lifetime analyses of the total cost to maintain an electric car versus a gas-powered vehicle. He deduced that the cost of his Tesla was comparable to that of operating the Subaru Impreza he was driving before.Stemplewicz’ electric cost is based on a time of use scheme. He pays approximately 19 cents per watt at peak time and, the rest of day, about 4 cents. Between midnight and 3 am, it goes down further to 3 cents. He touts the advantage of being able to rely on his own solar power during peak time and, if he generates more energy than he needs, selling back to the grid at 19 cents. By charging his car at night he captures the low rates. “So it will be super cheap to charge the car and I sell back to the grid at 19 cents. Can’t beat it!”

Watch video interview about renewable energy advocate with solar panels on his roof and and electric car.