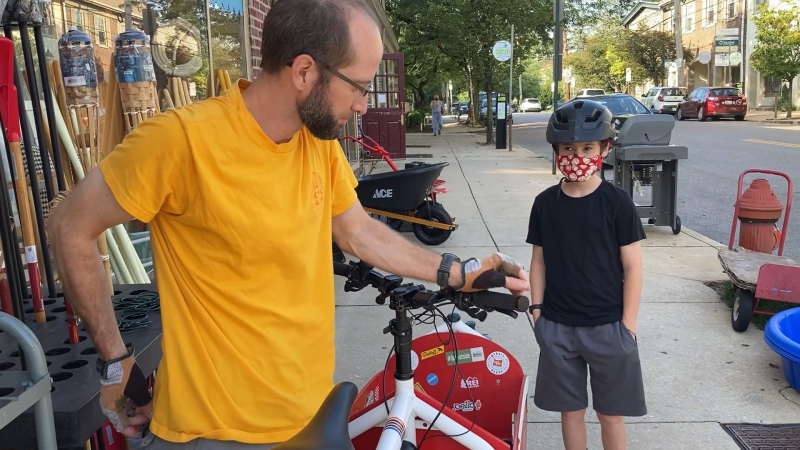 Mark Mumbauer commutes 25 miles round trip each day with his 10 year old son, Gabriel, on an electrified carbon bicycle from their home in Mount Airy to work and school in West Philadelphia.  (Click link for video interview.)The bike , their second, is a “Larry vs. Harry” model imported from developers Lars Malmborg and Hans Fogh in Copenhagen. “It’s our daily commuter, our Septa bus, our second car and our everything.” Through August of this year, they had ridden it every day except when conditions had been icy. Otherwise, for rainy or inclement weather, they put a cover on it. They had begun commuting on their first electric bike from Kensington where Mumbauer had lived for twenty years. Their new bike, which cost about $6000 has many features like an electric assist which helps up the big hills, Mumbauer says. “It works great as long as your battery doesn’t die.” It weighs about 40 pounds, has an all-aluminum frame, Shimano XT components like a mountain bike does and electronic shifting. It also features a ball joint, articulated steering, and dual disc breaks, front and rear. It can carry up to 250 to 300 pounds. Mumbauer relaters that UPS is using these models in Seattle. Drivers park their trucks nearby and load them up with packages to deliver downtown.

The Larry versus Harry Bullit is available from Firth and Wilson Transport Cylcles in Fishtown, Philadelphia. Kaspers Cargos in Maryland, Mumbauer says, sells these bikes to families with children with special needs at about cost

What does his son, Gabriel, like about the bike? The stickers. And sitting in the front over sitting in the back which he he had to do when he was in kindergarten; the view is much better. He even takes his violin along to school and sandwiches it between his legs and the frame.

Posted at 11:39 PM in CARS AND VEHICLES, TECHNOLOGY, TRANSPORTATION | Permalink 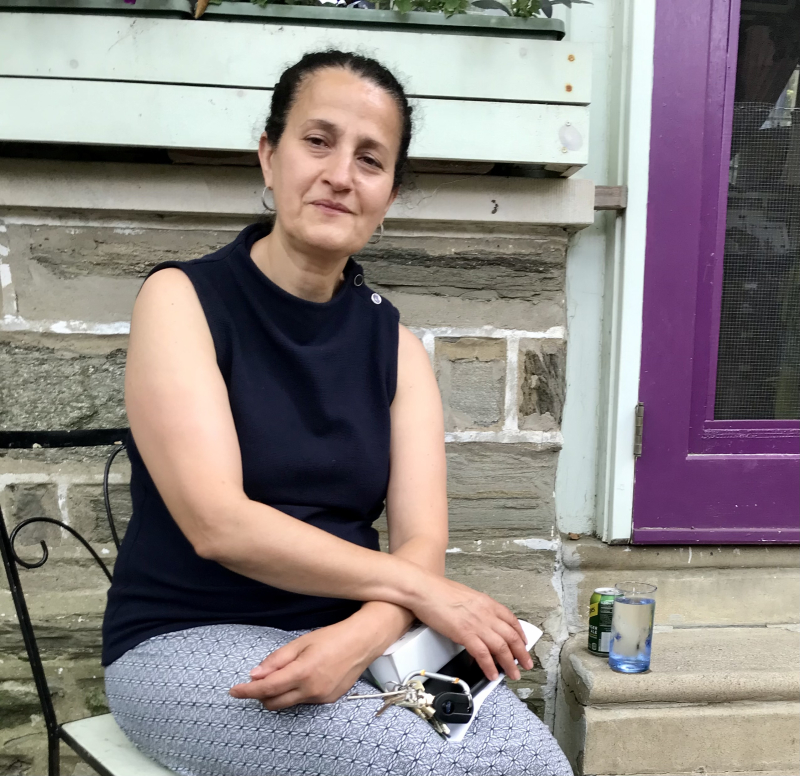 Alexandra “Alex” Khalil is running for the U.S. Senate. In a crowded field of 14 Democratic primary candidates vying for outgoing Republican U.S. Senator Pat Toomey’s seat in the May 2022 primary, she says can’t get the political reporters for Philadelphia’s paper of record, the Inquirer, to mention her name.

Khalil is mounting a vigorous door to door campaign and one of those doors was your correspondent’s. She’s expounds a progressive agenda of Medicare for all and a living wage. But she’s not against nuclear power.

Her entree into politics came when her son told her to check out Barack Obama. Kahlil did more than that: she worked on his campaign and now holds elected office as a councilperison for the borough of Jenkintown, a small town just outside northwest Philadelphia. There she is fighting against privatization of public utilities such as the sewer service. Professionally, she works in IT for the pharmaceutical company Merck. Khalil has also practiced law.

As the daughter of Palestinian parents from the West Bank, Khalil is especially keen on the protection of human rights regardless of identity or any other criteria.

In our interview, Khalil was most animated when she spoke of the conversations she has had with people while canvassing widely around Philadelphia area and in Lebanon and Schuylkill counties: the 80 year old woman whose husband suffered a stroke, and now they can’t pay their property taxes. She’s spoken with many seniors who are in similar danger of losing their homes, perhaps faced with high medical bills. She’s touched by the families who have lost children to drugs. She lays these ills at the feet of the Republican Party for failing to adequately fund human needs, schools and infrastructure.

Khalil believes her string connection with people as both a councilperson and campaigner will set her above the crowded field in voters’ estimation. She’s received coverage in the Northeast Times, her race is covered in Spotlight Pa and elsewhere and she is hoping more major media outlets will give her a fair shake

Pulls out her flute to play anywhere 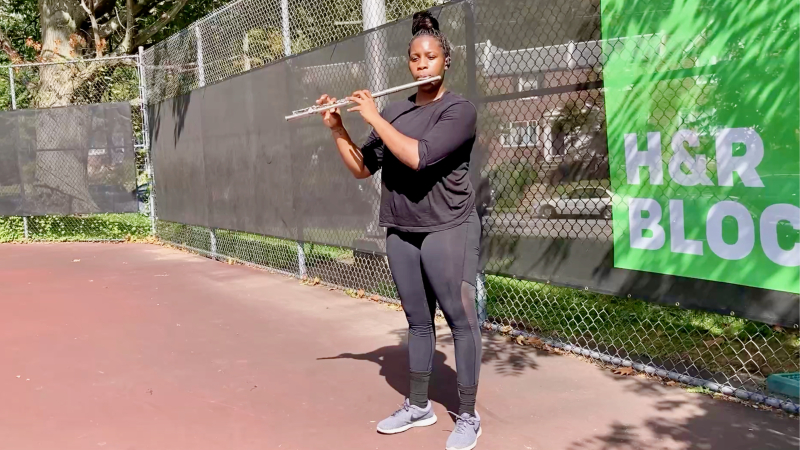 "I’ll play anywhere. I’ll play literally anywhere where there’s people walking around. I’ll just play because people don’t normally hear a flute. you know. They tend to hear anything other than a flute and I tend to think I play differently…” Your correspondent, early for a pickle ball lesson at the Water Tower Recreation center courts heard sweet, jazzy flute sounds from the other side of a tall dividing fence and walked over to find Jordan Quinton at the far end tennis court improvising on the flute -yes, differently. “It’s very important to be able to find your voice.” Quinton  had been working out at the Water Tower and had her flute on her and thought she would just take it out. “If I have my flute on me, I’ll take it out anywhere. I’ll play it on a bus if they let me.”

Quinton, who now works as a line chef baker, studied at the University of North Carolina at Pembroke. She plays flute, all kinds of march and percussion-snare, base drums, tenors, hand drums, bongos, claves, congas, xylophone, marimba and likely more! ”I was born into music so I guess I’m lucky. I sing. I do all the arts. Music is my strong suit.”

“It was very hard going to school but I’m glad I stuck with it as long as I did.” And passers by who may happen upon Quinton jamming on her flute are likely to be glad, also, that she stuck with the music. Watch flutist, a street musician, improvise on tennis court here.

51 ineligible people tried to vote in CHCA board election 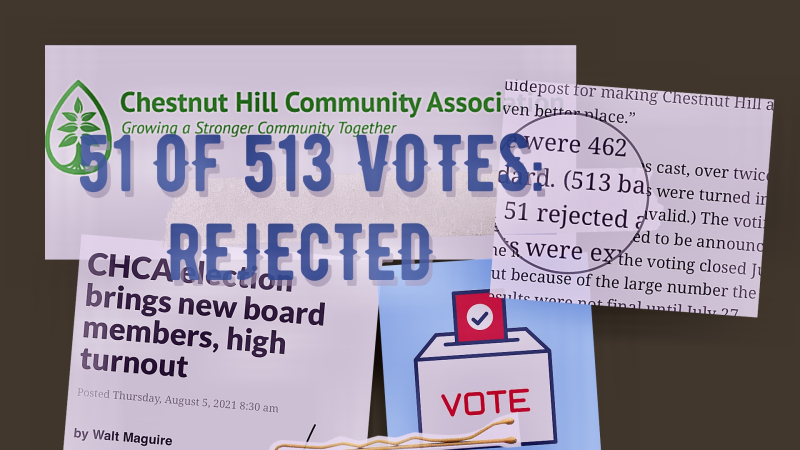 In a closely contested election between “slate” candidate and “non-slate” candidate factions, 16 candidates vying for 9 board seats,  the Chestnut Hill Community Association rejected 51 of 513 ballots cast as invalid, according to a report in the Chestnut Hill Local, August 5, 2021 edition. (Fifty-one votes account for about 10% of votes cast.) The report did not provide an explanation as to why the ballots had been rejected nor did the CHCA, owner of the Local, nor three current board members respond to a request for comment. However, John Derr, publisher of the Local, apparently taking on the role of spokesperson for the Association, stated that the 51 rejected ballots were from people who were not members of the Community Association and that some of those had lapsed memberships. He assured your correspondent that the election was fair without addressing your correspondent’s concern about election integrity relating to why so many people tried to vote in an election they weren’t eligible to vote in. Your correspondent has followed up with a letter to  the Community Association's President, Kathi Clayton.

In a letter to your correspondent, Clayton responded that she was disappointed so many votes didn't get counted and that going forward the association will more often and broadly publish the requirement that to vote a member must be paid up as of the designated date, June 30, 2021 this year. 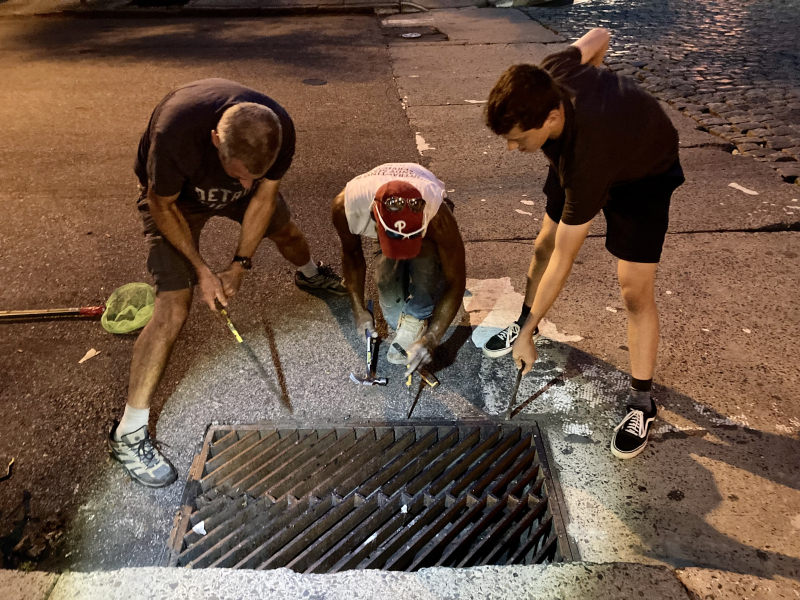 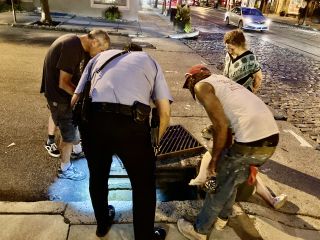