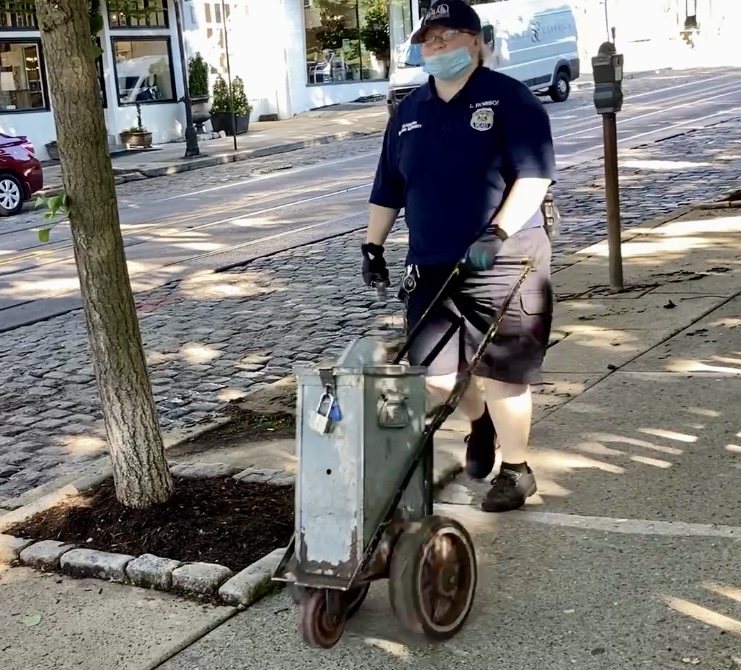 Coin collecting employees of the Philadelphia Parking Authority (PPA) make one of their last if not their very last appearance along Germantown Avenue in Chestnut Hill, northwest Philadelphia. A small team walks quickly down either side of the street going from parking meter to parking meter. One hand chained by the wrist to the wheeled collection box meteropens the round metal flap with a key and the other hand pulls out the cylindrical coin container, attaches it to the portal atop the box, twists to release the coins with a jingling sound and then inserts it back in the meter. Your correspondent surmised that a thief interested in stealing a box would not need too large a bolt cutter to cut through the chain but would likely be deterred by the physical brawl likely to ensue trying to part the money box from the human collector.

According to Phil Dawson, PPA is expected to begin removing the old meters and installing SmartMeter kiosks on the Avenue on Monday, June 7.  The project is part of a city wide plan to shift parking fee collection to credit cards or through the smartphone app, “MeterUP” which allows a driver to be notified when their parking time is running with an option to refill remotely. The user can stop the time early so as not to be charged for unused time.The meters currently have a slot for some type of card in addition to the one for coins but they seem blocked/non-functional.

Alex Bartlett, archivist of the Chestnut Hill Conservancy located photographs in the Conservancy collections indicating that they were installed at some point between around 1950-1955. He writes , “The Chestnut Hill Development Group (later Business Association) [and] the Parking Company (later Foundation)were very much involved in dealing with issues associated with parking at the time, including the creation of the parking lots behind the stores.

Watch video of parking authority employee emptying coins from parking meters along Germantown Avenue in Chestnut Hill shortly before they are to be replaced by a kiosk system and smart phone app.

Posted at 08:06 AM in CARS AND VEHICLES | Permalink