The orchid mantis and other subversive embroidery 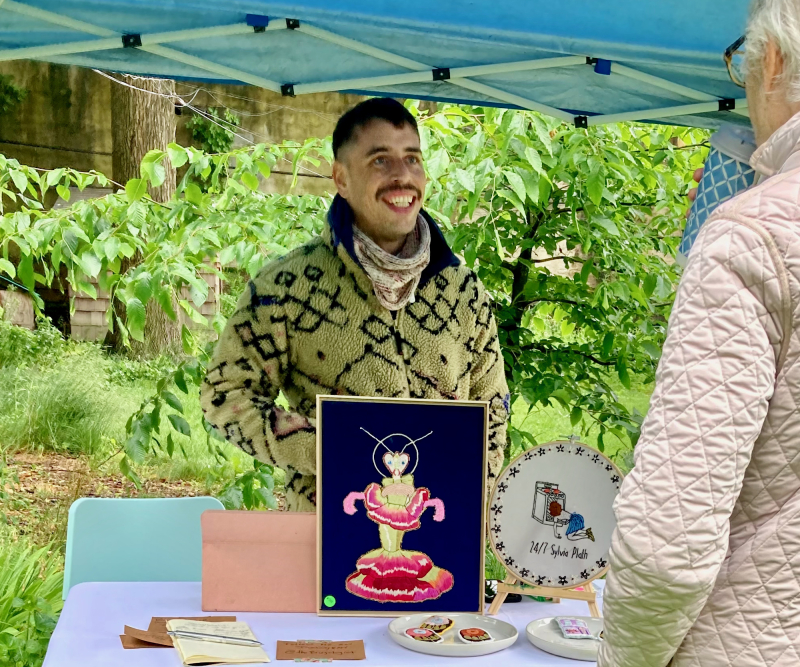 The “orchid mantis” is an erect praying mantis, wearing a raspberry-colored dress with folds that look like orchid petals. For this hand-embroidered piece, Richie Lopez started to hand-stitch a dress from images he saw in an old Vogue magazine and then decided to put a bug in it. Another, showing poet Sylvia Plath knelt next to the oven was inspired by the Lana Del Ray lyrics I've been tearing around in my fucking nightgown / 24/7 Sylvia Plath” from the song “hope is a dangerous thing for a woman like me to have.” Explains Lopez, “There’s a subversiveness about embroidery that people don’t really know about. That’s what I was doing here.” Life, death, sexuality and mysticism are subjects that intrigue Lopez and feature prominently in his work. His art also reflect his Latin heritage such as the one of a monstera plant emerging from a man’s torso, part of his “botanical boys” series and another of the “Handsomest drowned man in the world," from a short story by Gabriel García Márquez. “Oftentimes the entire medium is relegated to the domestic but there have been many people that have used embroidery as a way of expressing something that isn’t necessarily what people think embroidery is." That's what Lopez aspires to do. Watch a video interview of Richie Lopez who  finds inspiration in dark-themed literature and song for his subversive embroidery mixing fashion and biology