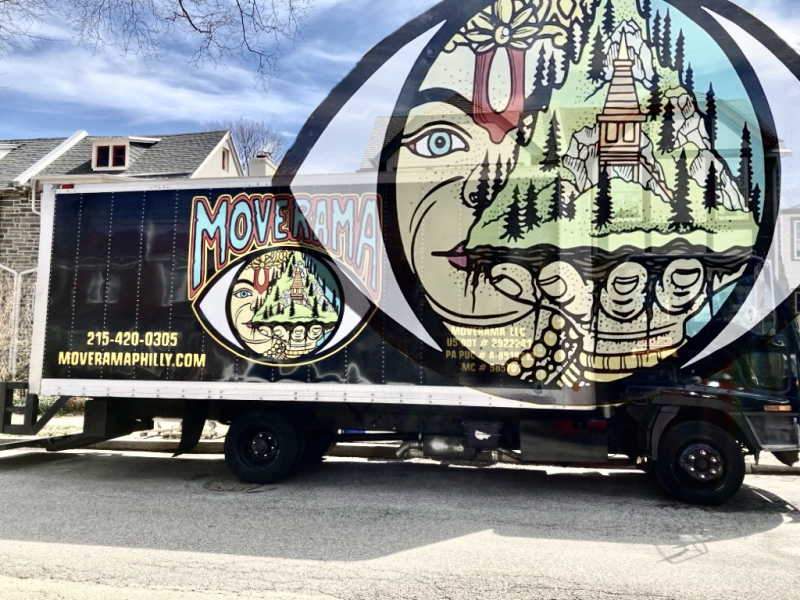 Moverama ( a concatenation of “move” and “Rama”) is a Philadelphia-based moving company with Krishna consciousness. The Hindu Lord Rama, an incarnation of the God Vishnu is central to a Sanskrit epic, the Ramayana.

Your correspondent encountered the shiny black moving truck with its unique logo down the street where they were moving in a new neighbor. One of the movers I encountered said his business partner is “into” the tradition He thought Rama might come from the earlier Vedas but there is much debate this online. The company company‘s logo is an eye and in the eye, a circle representing for the iris and pupil. In the circle is the face of the monkey God of strength, Hanuman, Lord Rama’s greatest devotee. Resting on his forward-facing palm-up hand is a green mountain with trees and a temple. The drawing references the following story from Hindu scripture:

“One of Hanuman’s greatest moments occurred when Indrajit struck with black magic in the middle of the night, severely wounding Lakshmana and knocking him unconscious. Listening to advice from the physician Susena, Hanuman headed for Gandhamadana mountain in the Himalayas to bring back the herb visalya-karani, which alone could save the lives of Lakshmana and the many vanara soldiers that had also been injured. To do this, Hanuman had to defeat an army of protective demigods, uproot the entire mountain because he couldn’t distinguish which plant was the correct one, and swiftly return before it was too late.” https://iskconnews.org/lessons-from-hanuman-lord-ramas-greatest-servant,1741/

The Moverama crew says their moving is as good as their logo is beautiful.

Posted at 10:46 AM in HOUSING, Religion, WORK | Permalink