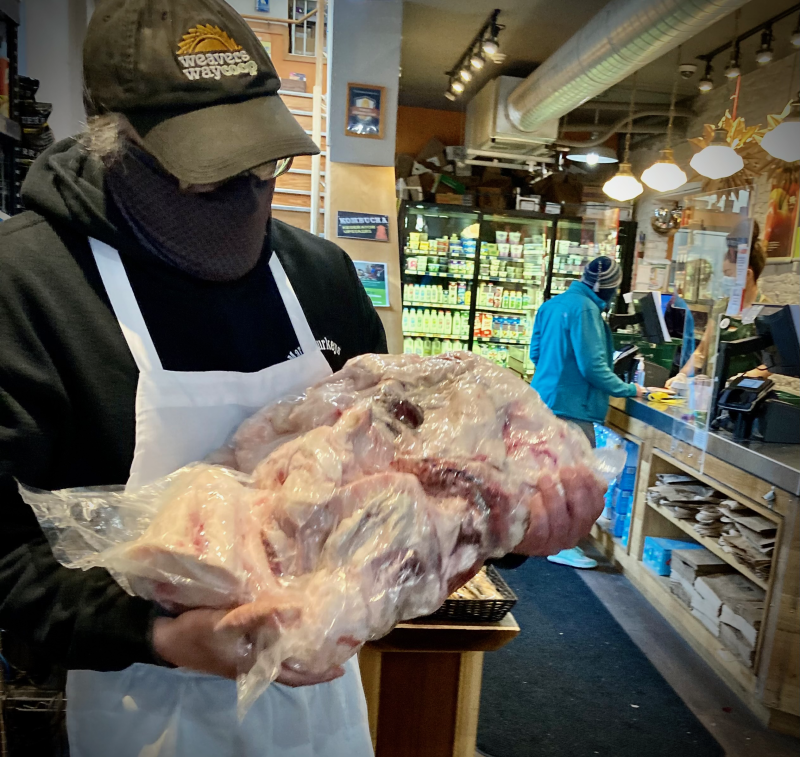 Apollo Heidelmark, Manager at the Weavers Way Co-op Mount Airy store reports that sales of beef have grown tenfold in recent years. Your correspondent was intrigued by a notice in the co-op’s E-News that the store was giving away beef fat for free so stopped in to find what that was all about! Ideally, Heidelmark would like to sell the fat but the store just has too much of it on hand. The store currently buys two cows a month from a local farmer. The cows, which are born and grow up to between 900 and 1200 pounds within six months to a year are strung up after slaughter to age. The cow is then halved and shipped to the store as a “primal” along with the beef fat. The staff cuts the beef into popular steak portions. Since flank steaks are popular but there are only two per cow, the store needs to buy additional flank steaks separately from a larger cooperative Also, to meet demand for meat, the store has acquired meat grinders to convert trimmings into ground beef. Heidelmark attributes the dramatic increase in demand to the protein value of the meat and great desirability among co-op shoppers for the meat of grass-fed cows. (The meat the coop sells comes from cows that may be “finished off” with grains.) Heidelmark anticipates coop members will render the beef fat for cooking, use it to make candles or soap or feed it to birds, squirrels and raccoons. Watch video here.