A community takes sides: Back the Blue or Black Lives Matter

Two separate rallies, one for Black Lives Matter and the other for Back the Blue both kicked off at 10:30 am on October 10, 2020 in Springfield Township, Montgomery County Pennsylvania in two nearby township parks. Was it coincidental??? Watch short video of rallies here.  An unscientific poll of 99  respondents on the NextDoor app indicates that people who support both causes are in a distinct minority, about 27%. It also indicates 76% support Black Lives Matter and  47% Back the Blue. Caveat: there is always the question of what people are thinking who are neither participating in such a poll or even on the social media platform where the poll was conducted. It's also worth noting that people may support the causes espoused without ascribing to a provocative movement or slogan. 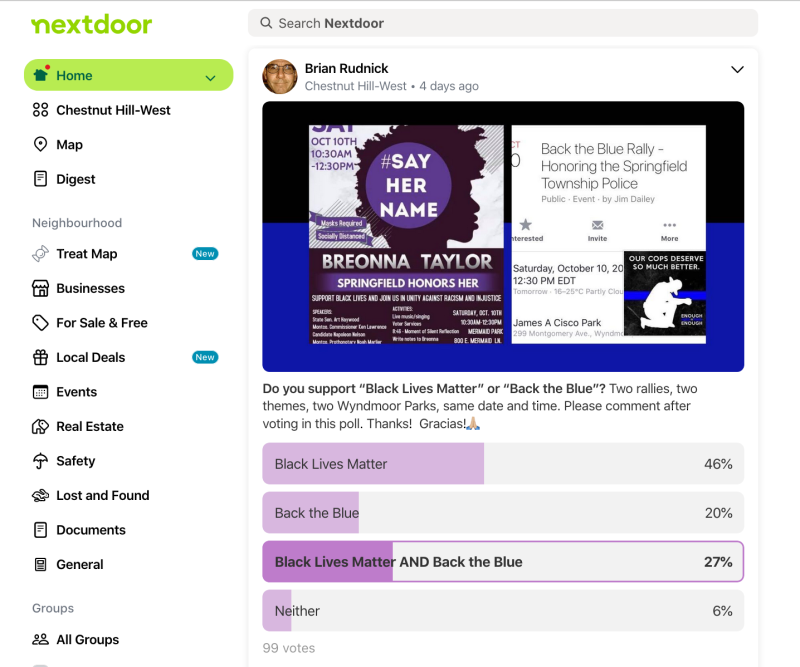 As a member of the minority who espouse both causes, your correspondent attended only part of each rally so the material here is certainly not comprehensive and due to personal history, not necessarily well balanced. Photos of both rallies here. 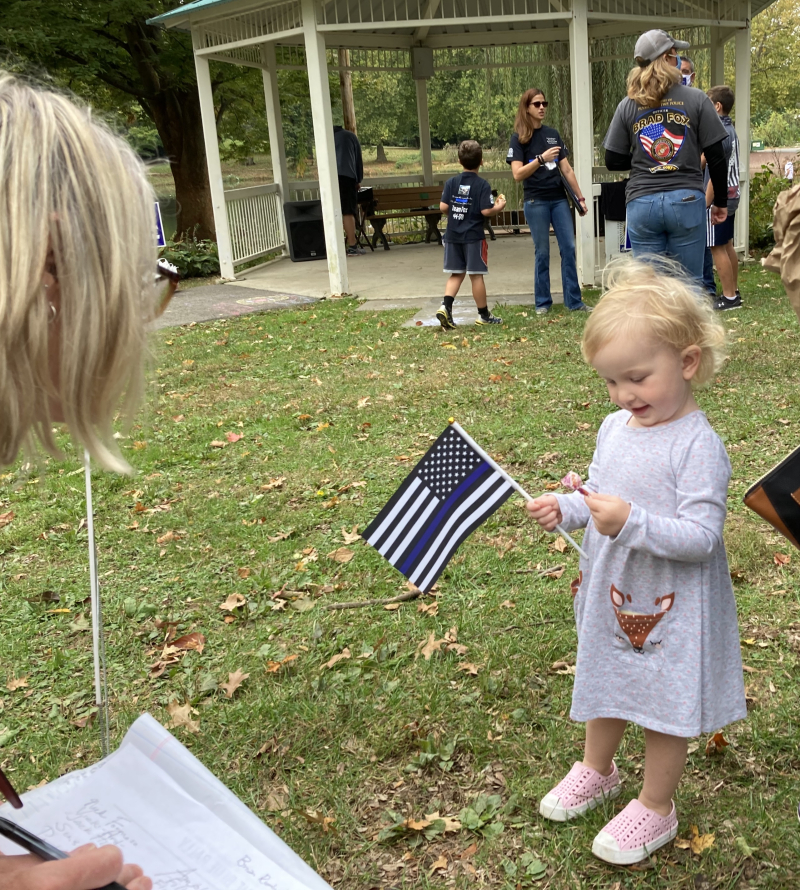 At the Back the Blue Rally in Cisco Park, your correspondent heard 37 year veteran, Michael E. Pitkow, Chief of Police, thank the community for their support and the dedication of his officers. He spoke of a survey being conducted [the outgrowth of community meetings] among community residents soliciting their input about what they want from their police department. He remarked about the challenging times ensuing after the onset of the corona-virus pandemic and the "death of Mr. George Floyd" but noted Springfield Township hadn't experienced the civil unrest occurring in many other places around the nation.

Michele Chesaitis, an active member of the Friends of the Springfield Township Police is concerned when people make negative generalizations about the police. She comes from a police and fire department family and is proud of her family’s service. She considers the close knit community of law enforcement as part of her family, too. When asked whether the Black Lives Matter protesters had any legitimate issues she answered "There are legitimate and valuable issues for every walk of life," and as to what whether police could do better, "that we stop lumping police into groups.” When introduced she began her public remarks by asking everyone to join her in a prayer for the police, "In the name of the father, the son and the holy spirit...." 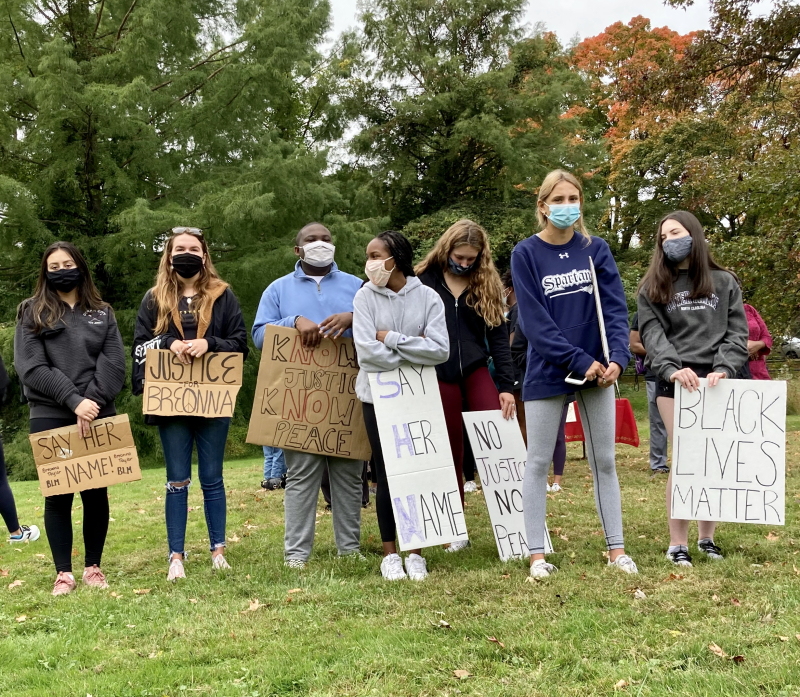 At the Unity and Diversity rally to honor Breonna Taylor, clumps of young adults, families and older adults were spaced far apart in Mermaid Park listening to the speakers. Montgomery County Commissioner Ken Lawrence contrasted the actions of Breonna Taylor’s boyfriend who fired out from inside their home, defending their home with the act of a white vigilante who traveled from his home and killed protesters “There’s a hypocrisy. That’s why Black Lives Matter. Because when it happens to us it’s always something that we did wrong to end up dead.” He highlighted a recent incident in Upper Gwynedd Township in which police successfully de-escalated a situation and no one died; they were able to disarm a man who had fired a shotgun at them. “It absolutely can be done.”  Napoleon Nelson, who is running for representative in the 184th district of the Pennsylvania State House, encompassing Springfield Township spoke next. He had visited the police rally, too, and a photo of him there appears in the photo album above. Your correspondent regrets an opening didn't present itself to interview him, being apparently only one of three African-American adults present at the police rally. The African American Republican congressional candidate Kathy Barnette was similarly engaged with others and Barnette's  mother declined to be interviewed. The below is only an excerpt of Nelson's remarks. Readers are encouraged to listen to the fuller versions of both Lawrence and Nelson here.

"Before I got here I was over on the other side of the Township at a Back the Blue rally. And I do, I support police. I think there’s an important role for law enforcement in our community. But this day, this time, is not about backing the blue.

This time is about calling out injustices that are happening in this country every day, in every community. It has not happened here, not because it can’t but because it has not happened yet! And so there’s always that item we must keep in the back of our minds, for some of us in the front of our minds. That we must do all that we can to protect, to envelop, to wrap our arms not only around our young people but our institutions to make sure that 'yet' does not come."- Candidate Napoleon Nelson

I emailed Mr. Nelson three times and did not hear back

I wanted to add that I found your remarks overall very eloquent and moving. Thank you. I apologize for not saying this in my original email.
(I wrote to him that I believed his remark about it not being the day or time for backing the police was divisive) I truly believe that someone who wants to represent everyone  as a holder of public office should not say to one group what he'd never say to another group.  I believe Mr Nelson would never say to a gathering to honor the police, "But this day, this time, is not about backing the blue."

I am sad, and frightened actually, that you believe what happened to Breonna Taylor could happen in Springfield Township. Why do you think that?? https://youtu.be/xSrB5n56wS8  I saw you at the Back the Blue rally, too. Did you have the opportunity to address that rally? What would you have said? Were any Friends of the Springfield Township Police invited to speak at the Breonna Taylor rally? ( Maybe I am just plain thick and one rally was actually a Republican Party rally and the other a Democratic Party rally?) "