HOME VIDEOS PHOTOS ABOUT
Previous month:
May 2020
Next month:
July 2020

By mid-afternoon Tuesday, most businesses along the Germantown Avenue business corridor (excluding some of the vacant ones ) had been securely boarded up in the wake of widespread protests and looting elsewhere in the city. The Weavers Way Coop market, which has a wide expanse of windows, was a notable exception. (The Coop's General Manager, Jon Roesser, explains its decision not to board up below.) When asked why he was boarding up the Wells Fargo Bank a workman replied "It's a job. Do you think I like doing this? It's sad." 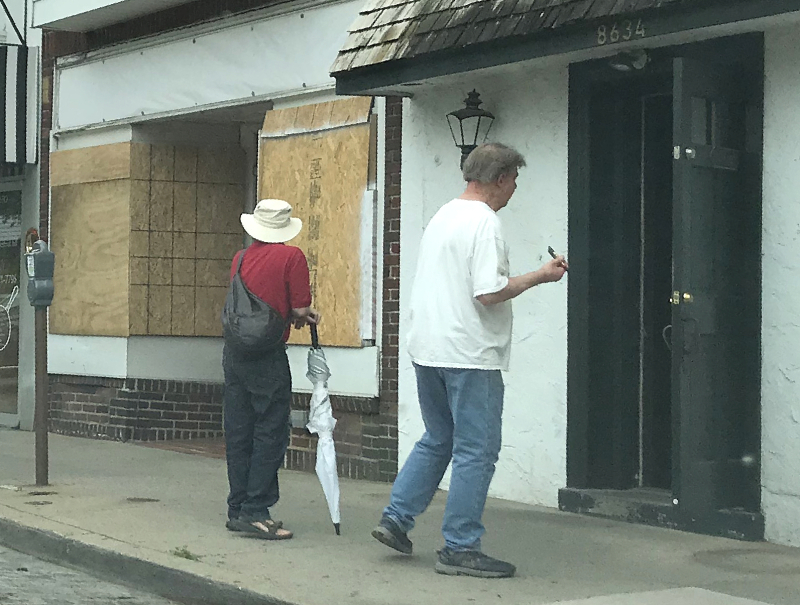 Joe Pie of McNally's Tavern, was putting a new coat of dark green paint on the entrance door (No boarding up to do because the tavern hasn't had windows on the narrow facade for more than fifty years.) He said that businesses along the Avenue had been "cased" the day before and was very alarmed should any photos be posted on social media. Bohemian Pink owner Monika Schermer said her store was boarded up based on the advice of the Chestnut Hill Business Association and the 14th District Philadelphia Police. Schermer directed questions to the Business Association. Its Executive Director Phil Dawson could not be reached for comment. 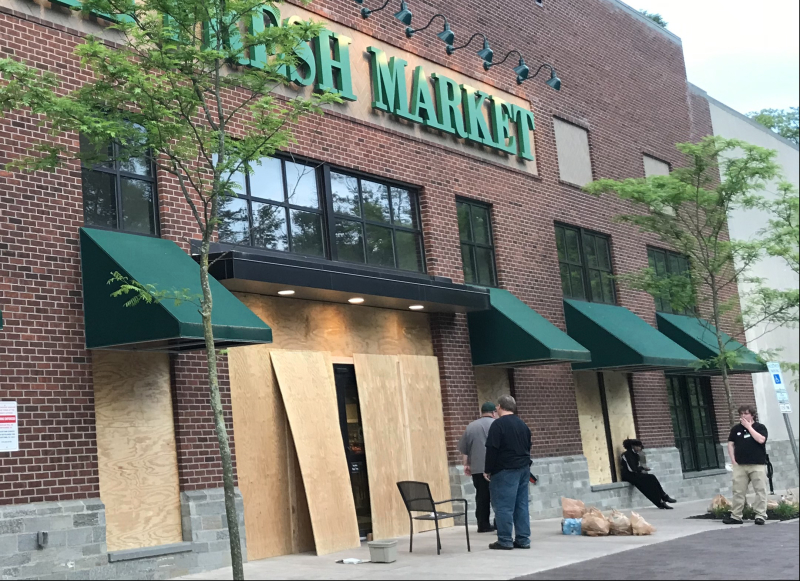 Outside the Fresh Market at 7 pm, a market employee stood outside watching two workmen prepare to board up the doors. He relayed that the CVS, farther down the street, had been broken into. Talking on the phone, one of these workers could be heard saying he would be back at the store in the morning to take the boards off so the store could open for business. "Hopefully I'm going to be putting these boards on and off for a couple days." 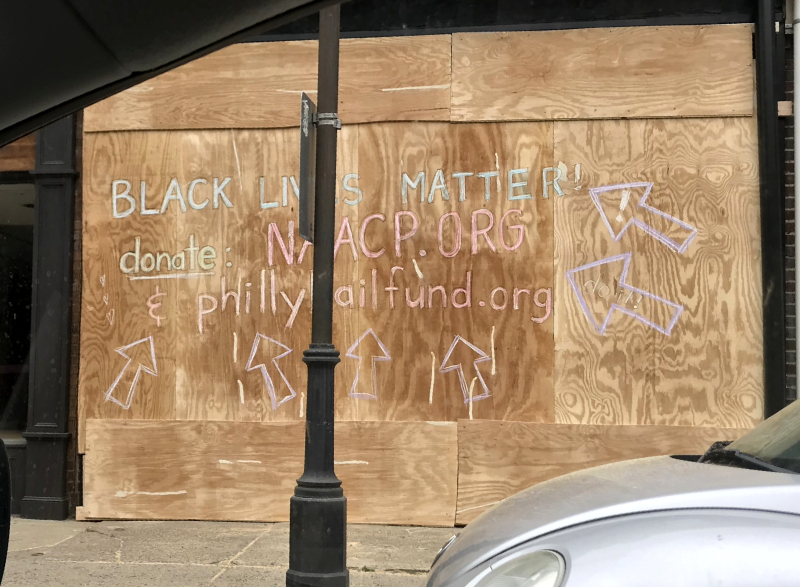 Large, delicately lettered chalk messages have already appeared on some of the boards. "Love lives here" on one and "Community" on another. Hillary O'Carroll proprietress of Isabella Sparrow, captured in a photo in the below tweet, is behind the heartwarming words. She says she wanted to add non-political messages of love and home by writing on the the boards. The one shown above "Black Lives Matter - donate: NAACP.ORG & phillybailfund.org" she attributes to an employee of Caleb Meyer. On the Tailored Home store, O'Carroll's message is simply "This is home"

Driving down Gtown Ave this morning, it seems we're part of a vanishing minority of businesses who've chosen not to board up; lumber yards must be rejoicing.
For starters, please know I don't question the motives of other business owners.  Whatever drove them to decide to board up, I'm sure it made sense for them.  I understand PPD recommends boarding up businesses as a precaution.  PPD would have no reason to recommend anything different.  And they are busy and hard pressed and I'm sure not just a little tired by now.
Our principal reason for not boarding up was consideration of our staff and customers.  Still in the midst of the pandemic, grocery shopping is already a stressful activity (working in a grocery store is even worse).  The masks and the hand sanitizer and the social distancing and the 15 person customer cap, it's all disconcerting enough.  Boarding up our windows would aggravate the stress.  Our Chestnut Hill store is small.  Boarding up the windows would block out the natural light and make it feel even smaller.  Who wants to work in a plywood box?
In making this decision I had 100% support from the Co-op's management team and 100% support from our Chestnut Hill employees (at least the 25 or so with whom I spoke on Sunday and Monday).  Last night I received 100% affirmation of the decision from our board of directors who, as you know, are democratically elected by the Co-op's 10,000 member households.
Having spent much of yesterday in Chestnut Hill chatting with customers (masked and 6 feet apart!) I received thumbs up from all of them.  Many expressed dismay at the acres of plywood along the avenue.  One out of four households in Chestnut Hill are member-owners of the Co-op.  They patronize other businesses on the avenue too.
Yesterday's demonstrations were largely peaceful.  Things could change but the folks who are out protesting the murder of George Floyd and demanding the end of institutional racism are not vandals or looters.  PPD is as always hard at work tracking down the bad actors who are taking advantage of the demonstrations (and undermining the demonstrator's message) by causing mayhem.  It is too early to say but we can perhaps be hopeful that the worst of the looting is over.
I have to say, again not questioning the motives - or the politics - of other business owners, the sight of all those boarded up buildings along the avenue is unnerving.  And it can't be good for business.  I do hope the other businesses along the avenue will consider taking the boards down sooner rather than later.
It will take one hooligan, armed with a brick and a strong arm, to make us look like fools.  Maybe we are fools. "