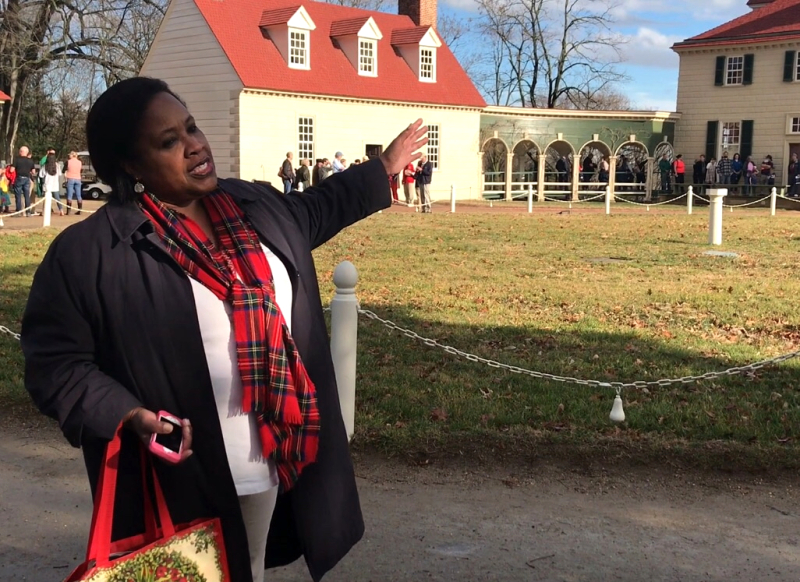 Historical interpreter Reba Carruth who led a group including your correspondent on the "Enslaved People of Mount Vernon Tour" says that before her time, the tour was called "Slave Life" and focused on Washington's use of slave labor. She explained that the current format makes a distinct change in terminology from "slaves" to "enslaved people" and not only focuses on Washington's dependence on them but how they were transformed when Washington breaks with tradition by bringing in skilled tradesmen from Europe and requiring them to train the enslaved people to practice these trades at the same high level as their own. Carruth gestured toward the wide swath of field sloping down from the mansion and gave a shout-out to George, a slave who had acquired the skills of a master landscaper to maintain the grounds.

Washington inherited slaves from his father when he was only eleven years. Washington's marriage to Martha Custis brought many more slaves to the Mount Vernon estate. But he had a fraught relationship with slavery and shortly before his death provided in his will that the 123 slaves he directly owned be freed.

As the Washington family intermarried with the Lees and Custises, families of standing both in England and the colonies, by the time of the civil war, many family members had become Confederates. At the beginning of the twentieth century, the slave cemetery down by the Potomac River had been destroyed and planted over. It was here that Carruth concluded the tour with a short service and wreath laying at a large stone memorial set amidst ongoing restoration of the cemetery. Some of us accepted her invitation to read aloud short biographies of some of the slaves known to have lived and died on the estate.

According to the official website, "Mount Vernon is owned and maintained in trust for the people of the United States by the Mount Vernon Ladies Association of the Union, a private, non-profit organization." According to Carruth, this group and others with very close associations to Mount Vernon have scrutinized and had to approve of the tour contents which now includes acknowledging that there were [sexual] liaisons between the gentry and the enslaved women, hitherto held hush. Watch video tour of George Washington's Mount Vernon and interview about the nature of the tour here.