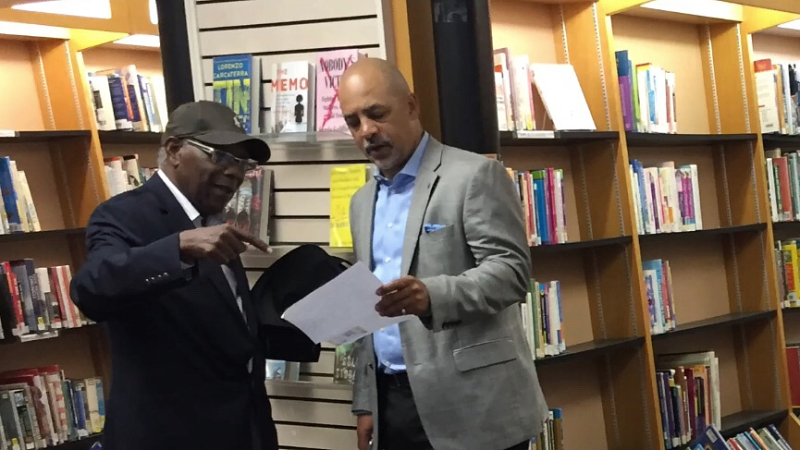 We  received a voicemail on our landline from Pennsylvania State Representative for the 200th district Chris Rabb (pronounced like "dab") with an invitation to try out, this past Friday, Philadelphia’s new ES&S voting machines at the Wadsworth Branch Public Library. Your correspondent planned to first attend a yoga class at the nearby Lovett Branch Public Library, then head over to Wadsworth to get acquainted with the new machines which have been in the news. See Philadelphia's New Voting Machine Contract in Jeopoardy... Coincidentally, PhD renaissance man, yogi and fair election activist Josh Mittledorf was substitute teaching. After class, I asked Mitteldorf to explain his concerns about the new machines. He pointed out the ES&S company’s sordid history and claimed that the software it uses could possibly skew results; even election officials purchasing the machines do not have access to the software to verify its integrity because, in legal terms, the software is considered a trade secret.

I headed off to Wadsworth where a representative from the Philadelphia City Commissioners' office walked me through how to use the new machine and referred me to Rep Rabb for any additional questions. The voting process is initiated when a voter inserts a physical ballot into the machine.  On a large display screen, the voter then touch taps the candidates they want and, when done,  the printed ballot with the voter’s choices shows up behind a window panel for the the voter to approve before submitting their vote. Predictably, on the demonstration machine, your correspondent voted for Democrat Party candidate Nick Foles for President and Green Party Candidate Julius ("Dr. J" Erving) for U.S. Senate. Then it was time to buttonhole Rabb.

BR (your correspondent, Brian Rudnick): Are these machines secure?

BR: How do we know the election is not being stolen?

CR: I agree. Just like any system, Any system  is imperfect.

BR: Any system- even a paper ballot system…

BR: Why don’t we have access to the software in the systems?

BR: You’re our representative, can you ask?

CR: The City Commissioners’ office is here so you can ask directly.