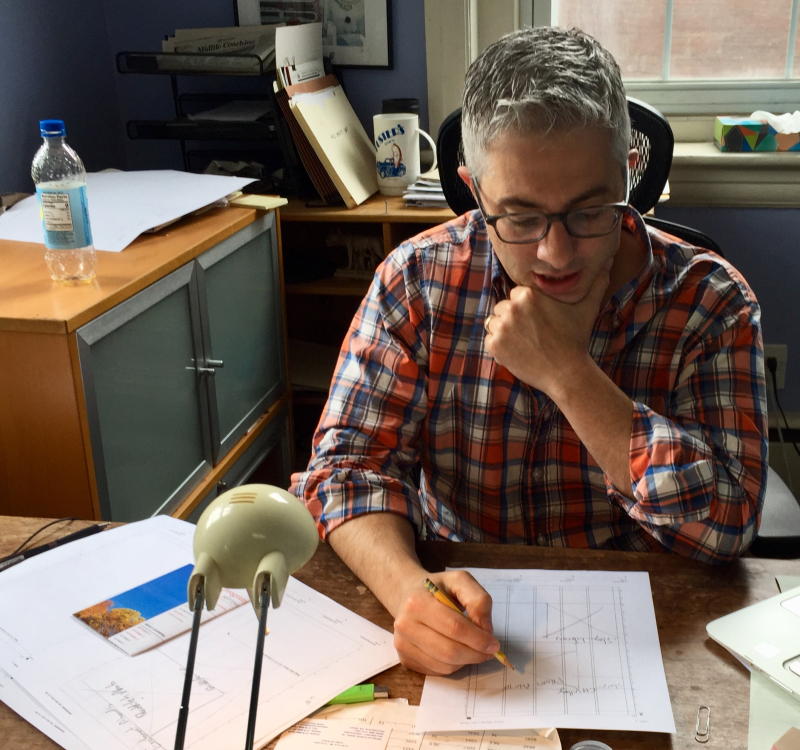 Your correspondent observed and spoke with Chestnut Hill Local Editor Pete Mazzaccaro on a busy Monday morning as he was busy finalizing stories with his associate editor, staff writer and interns, churning out the obituaries that are usually handled by the vacationing articles editor, deciding on lead stories and knocking out headlines, then laying these out with photos for the front page. The weekly, a publication of the Chestnut Hill delivers news and features to some 5000 residents of Northwest Philadelphia and neighboring Montgomery County through with its printed edition and to thousands more regular readers of its online edition, https://www.chestnuthilllocal.com 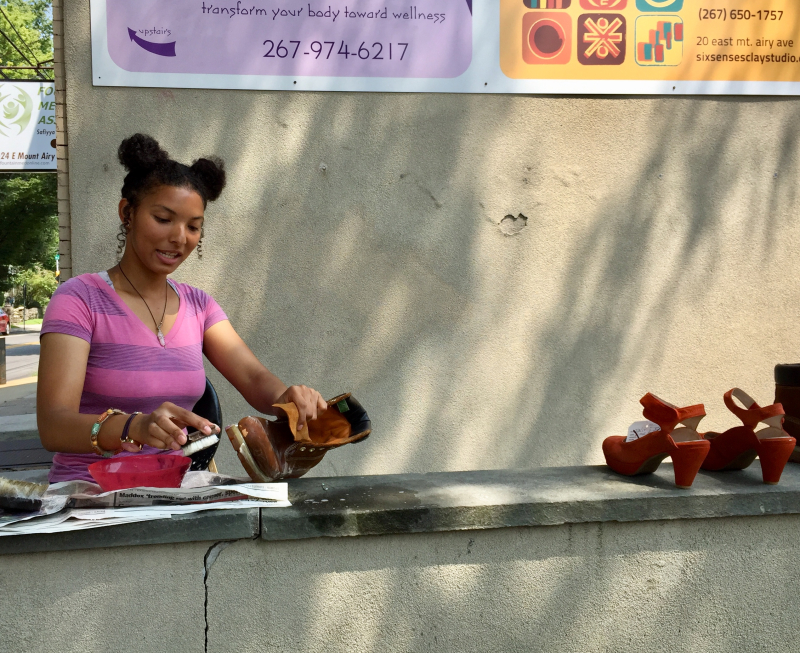 Janae Davis, an apprentice at Ace Shoe Repair shop in Mount Airy was outside the store on a fine summer day cleaning boots and shoes sitting at a low wall which served as her work table. Asked about her favorite job she answered unhesitatingly it was dyeing a pair of shoes dark brown. It involved cleaning the shoes first, stripping the original color, then applying dye, which sometimes requires several layers to get the perfect effect, she added. Davis would love to learn how to fix heels. Of Ace Shoe Repair she glowed. "They do a lot of great work." Watch video of shoe repair apprentice cleaning boots, talking about her aspirations.
​ 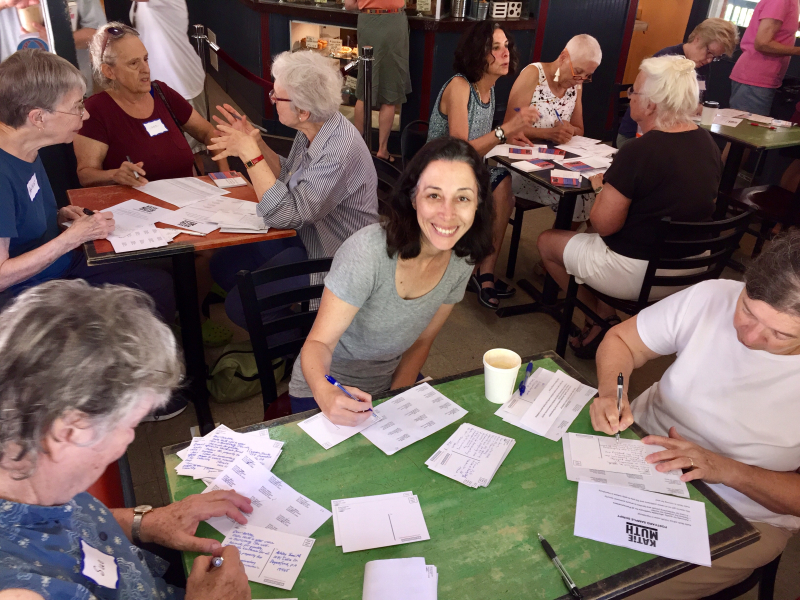 Under the auspices of Turn PA Blue and Indivisible Philadelphia Northwest, Ann Mintz distributed packets of postcards to 20 some neighbors at the High Point Coffee Shop in the Mount Airy section of Philadelphia this Wednesday. Seated around tables, each week the group hand writes postcards to voters in the surrounding counties urging them to support Democratic Party candidates in November elections. Boosting Jennifer O’Mara, Democratic candidate for state representative in Pennsylvania’s 165th district in Delaware County was the focus of this week’s efforts. Mintz cited research showing individualized postcards can boost voter turnout up to 3% which can make a difference in close elections. In a recent instance, a Democrat won a legislative seat by a mere 76 votes. Named for an aunt who was murdered in the Holocaust, Mintz relates that the administration’s immigration policies are very personal to her - handcuffing of 4 year old immigrant children, separating them from their parents. She also deplored the administration’s attacks on the LGBT community, tax cuts for the wealthy and the rollback of environmental protections. “I want my country back” Mintz intones. She notes that a health reporter from the Washington Post is visiting an upcoming postcard writing session with an interest in writing about how political activism is helping people cope in these times. Watch video interview of activist organizing voters to write postcards for Democratic Party Candidates in 2018 Pennsylvania midterm elections.

Photo: Sue Wells of Wyndmoor (left) and Charlotte Law of Manayunk (right) were among nearly 20 people gathered at the High Point Café in Mount Airy writing postcards in support of Democratic Party candidates in neighboring counties running for the Pennsylvania state legislature. In the center is Andrea Koplove, Director of Outreach for Turn PA Blue which is also spearheading canvassing and phone banking events throughout the weeks leading up to the November midterm elections.

Before the news cycle moves too far ahead, I want to thank you for the indefatigable, unbelievable, and never-ending support of each and every one of you who gave your time and energies and resources to organizing, canvassing, hosting, fundraising, postcarding, and phonebanking for the entire slate of candidates running up and down the PA ticket! Here's some of what we did over the past few months:

Our work made a huge difference!

Please take a moment to savor these election results:

We broke the Republican super-majority and picked up at least five seats. Among the victories were four candidates whom we supported in SEPA: Katie Muth, Maria Collett, Tim Kearney, and Steve Santarsiero. Tina Davis’s race is still too close to call, with Davis trailing by a mere 100 votes.

Just remember, these are seats that have been gerrymandered to prevent us from winning, which makes these results all the more staggering. Way to go!

Finally, SEPA contributed 4 US Congressional flips that were central to winning the House majority (currently at 28 seats and counting) for the Democrats!

What's next? That's easy: MORE WORK AND MORE RACES TO BE WON!

More on that in the coming weeks..."