Why her fainting goats fall over 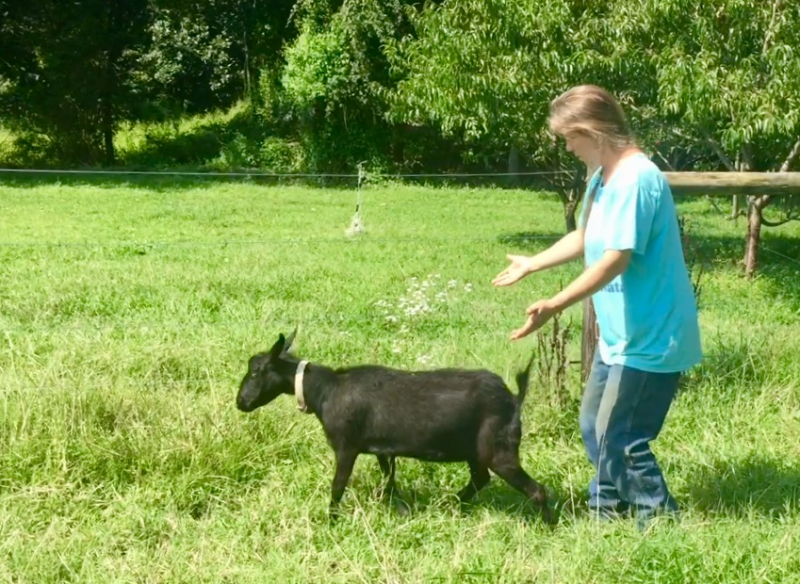 Carrie Eastman raises fainting goats for sale at a farm near Gettysburg, PA. Staying over at her bed-not-breakfast we had the chance to become a little acquainted with her herds. Just as we entered the field, some goats scampered across a narrow land bridge over a small creek and the last in line froze in place then fell flat over on her left side. After a few seconds she righted herself, "slightly wet, slightly annoyed." Fainting goats, she explains have a genetic condition called myotonia congenita. "Basically, the enzyme that tells your muscles to relax after they've contracted is low. Most of the time it's not an issue but if they get that adrenaline hit from being excited - feeding time, breeding, something scares them, the muscles contract and then they're not able to release right away and the goat stiffens." In terms of natural selection the characteristic is not desirable. For the fainting goat breed, the key is to breed for a moderate amount of the condition. For the goats, it's like doing isometric exercises. For humans, those exercises result in a high meat to bone ratio. Eastman speaks lovingly of her goats by name, tells how several are related to each other - and has not eaten any of the goats she's raised. Watch video of fainting goat being picked up by farmer who breeds them.