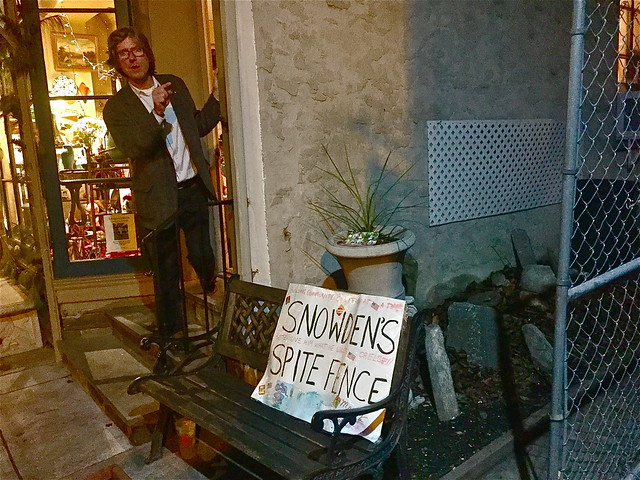 A tall chain-link fence recently appeared dividing the narrow walkway between two buildings on Germantown Avenue in the posh Chestnut Hill shopping district in northwest Philadelphia. And now, next to it a sign that reads "Snowden's Spite Fence." George Hobe says the fence went up between his antiques store and a building owned by Richard Snowden/ Bowman Properties after Hobe refused to sell his building to Snowden. Hobe maintains the walkway has long been a public thoroughfare, that the fence is illegal and that the Philadelphia Department of Licenses and Inspections has not addressed complaints against the fence. During our interview Hobe retrieved a working Monopoly boardgame from inside his store called "The Game of Chestnut Hill." Snowden, who owns a large and ever growing proportion of the properties along the corridor, is presumably the inspiration for the unique Chestnut Hill version of Monopoly. Watch video interview here.