A father and son  "mine" bitcoins and litecoins 24/7 in their unfinished Chestnut Hill basement.

These "coins," son explains, are virtual currencies not under the control of any government.  As such, the world of digital money has attracted illegal activity such as the Silk Road online black market that the U.S. government has shut down for dealings in drugs.

Rocky relates that bitcoins are convertible to dollars and that when China recently clamped down on their use, the price crashed from upwards of $1200 per bitcoin to $700.

These exchanges depend upon an army of computer geeks called miners (like the duo) to verify transactions through the use of computers installed with software that solves complex mathematical formulas. As explained in an Internet video, miners may work together in "pools".

The son enjoys both the technical challenge of configuring and adding hardware and the money-making aspect of mining.  A friend of theirs, he says, has earned $100,000 with a shed full of equipment. For now, the duo are transitioning from bitcoin to litecoin which uses the same peer-to-peer network protocols as bitcoin but can be mined using consumer level graphics cards. They currently earn about $16 a day from running their set-up around the clock out of which $2.50 a day covers additional electricity charges.

Dad is not new to home industry; he also keeps bees.

Taking a step away from homelessness

On the eve before Christmas Eve, Paul Rossetti was standing in the rain at the corner of Highland and Germantown Avenues hawking  “One Step Away” newspapers for a $1 each. (small photo at right) And he has been working this and other corners in the city throughout January despite the bitter cold and light pedestrian traffic. (above photo)

Rossetti grew up around the Pottstown area and got involved in drinking and drugs through the influence of peer pressure. DUIs (driving under the influence convictions) landed him time in jail. He’s now living at the Germantown Y men’s home.

According to its website, “One Step Away is Philadelphia's first street paper aimed at raising awareness of homelessness and providing employment to those in need. With each dollar received, 75¢ goes directly to the vendor. The other 25¢ covers the printing costs. The vendors are people experiencing homelessness or joblessness. While the vast majority of One Step Away vendors are living on the street or in temporary shelters when they start with the project, most are able to use the money earned by distributing One Step Away to secure their own housing.” http://osaphilly.com/

Rossetti says he’s going to NA and AA meetings and trying to stay on his feet and keep busy. Rules at the Y are strict; if he should come back high or drunk, he would be given 15 minutes to vacate his room. With janitorial and construction experience, Rossetti hopes to find work and secure an apartment of his own. Eventually he would like go into business for himself.

The name, “One Step Away” is meant to highlight how so many people in society are close to becoming homeless through unforeseen financial and personal crises. At the same time, the name honors the major step the formerly homeless individuals who are producing and distributing the paper have taken away from a life on the street.

Partners Robert Bynum and Chef Al Paris are excited that construction is nearing an end at the long empty site of the former Melting Pot Restaurant and that their French Bistro and Jazz Cafe is set to open in a few weeks' time. Watch video interview here.

Posted at 11:46 AM in BUSINESS, ENTERTAINMENT, Food and Drink, Music | Permalink

How Lego conquered the toy industry brick by brick 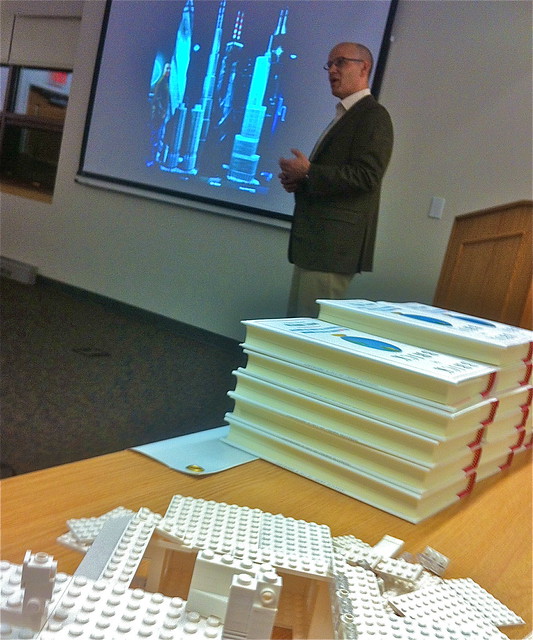 The Lego Company has been fantastically successful. In each of the last 5 years sales have risen 24% and profits, 40%. But it was not always so. For most of its 80-year existence, its reach did not extend so far beyond Billun, Denmark, where Ole Kirk Christiansen, a carpenter unable to secure enough wood to build furniture during the 1930s depression, began experimenting building wooden toys.

The company under Christiansen’s progeny soared in the last couple decades but tie-in products to the Star Wars and Harry Potter movies nearly doomed the company in 2003; sales of those products crashed when the movie franchises hadn’t yet come out with new films.

This, according to Wharton Professor Dave Robertson and former LEGO Professor of Innovation and Technology Management at Switzerland's Institute for Management. Robertson, a Chestnut Hill resident, discussed his new book, “Brick by Brick: How LEGO Rewrote the Rules of Innovation and Conquered the Global Toy Industry” at the William Jeannes Library in Lafayette Hill this past Thursday evening.

He began his slide talk by distributing baggies, each packed with the identical same six logo pieces, and instructed the audience to “Build a duck” and gave us only a minute or two. Participants then brought their “ducks” up to the front table. At the end of the talk, Robertson pointed to the wide variation of these Lego “ducks” as evidence that incredible creativity is possible even when severe constraints are imposed, a major thesis of his book.

He credits Lego Company’s resurgence to its imposition of key constraints: drastically reducing the number of parts (about 14000 different ones at peak) that had made the manufacturing process unwieldy, getting back to products that are more “Lego-y” and subjecting product proposals to the approval a committee of 3 seasoned Lego designers. And, ultimately, insisting that projected profitability be a constant constraint.

What Lego pioneered was not just a toy, Robertson maintains, but a system of play. And that system “is about the brick.” 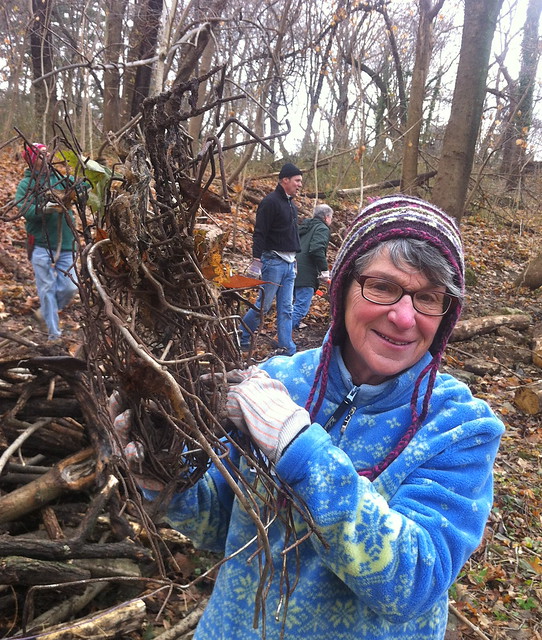 Dozens of volunteers showed up on Saturday to help remove invasive plants and debris from newly acquired Philadelphia parkland in Mount Airy.

Efforts of the Wissahickon East Project spearheaded by Antje Mattheus who lives nearby at the 2 acre historical Cresheim Farm, along with the Friends of the Wissahickon, the Chestnut Hill Historical Society, and ultimately Philadelphia’s Department of Parks and Recreation headed by Michael DeBerardinis,  helped spare the overgrown six-acre woody tract abutting the Cresheim Creek from private residential development.

Work began in earnest on rehabilitating the site and creating a quarter mile loop trail under the direction of David Bower, Fairmount Park Volunteer Coordinator. 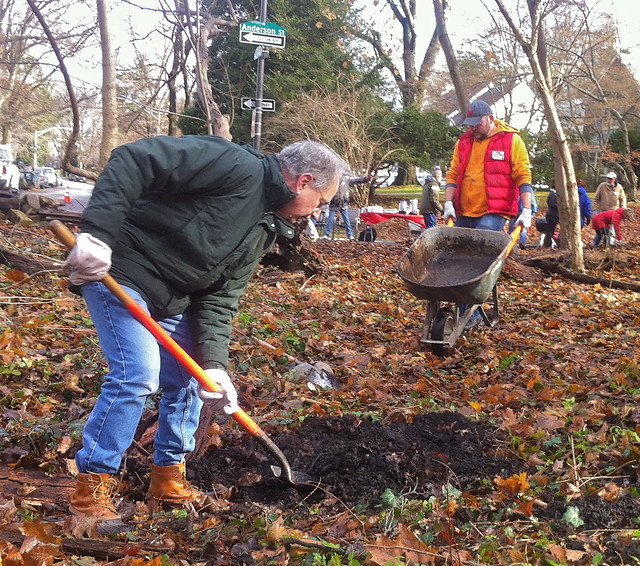 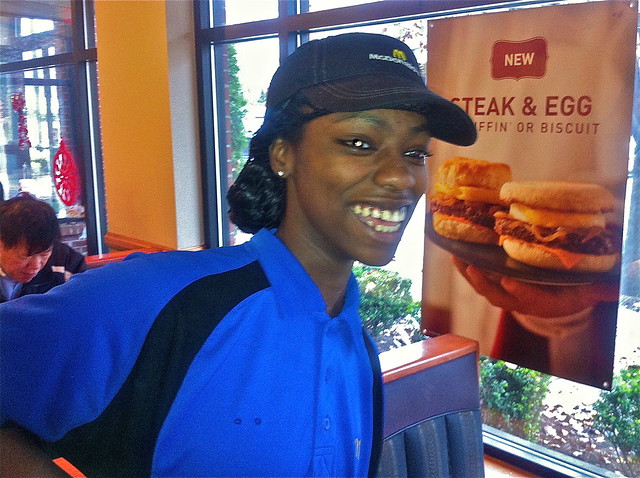 Danielle Taylor of Germantown, a 12th grader home schooled through Agora Cyber Charter School, works 30 hours a week at the Chestnut Hill McDonald’s. She’s paid at the rate of $7.25 an hour which she thinks is OK for someone, like herself, in high school. She gets no benefits; after a year’s work she may be entitled to a raise of 25 cents an hour. Her goal is to attend college, major in business and technology – and it sounds like she wants to stay out of the fast food industry.

Danielle was interviewed on Thursday December 5th, a day when fast food workers in 100 cities across the nation staged walkouts in support of the right to unionize and demands for a more livable wage.