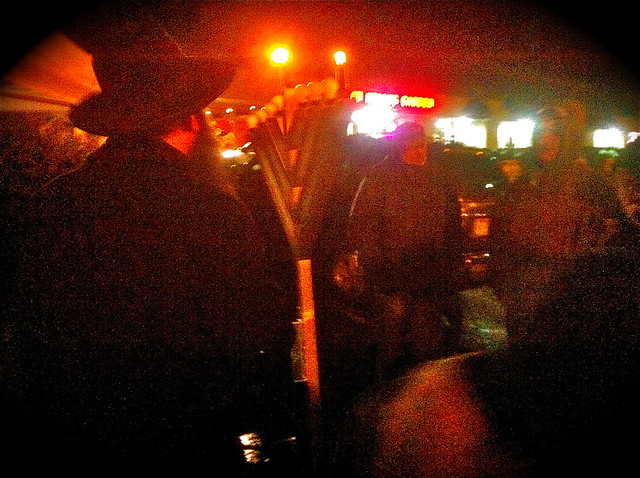 It appeared that Rabbi Yitzchok Gurevitz’s faith in the accuracy of the weather forecast was rewarded last evening. Skies cleared just before the public lighting of a large Hanukah menorah at 6:30 pm on a grassy area beside Chestnut Hill Plaza at the bottom Germantown Avenue above Cresheim Drive.

Twenty some people such as Norm and Leah Schwartz of Mount Airy who brought their granddaughter, braved the near freezing temperatures and driving winds which had blown out the afternoon’s rain and sleet, to celebrate the first night of Hanukah. As Gurevitz, leader of  Chabad-Lubavitch of Northwest Philadelphia, lit an oil wick candle, they sang prayers to mark the beginning of the eight-day Jewish holiday that commemorates the successful revolt of the Jews against the Syrian king Antiochus in 165 BCE in Judea and the rededication of the Temple that had been desecrated at his orders.

Hanukah is a special holiday, Gurevitz explained, because Jews are called upon to observe it not just in the home but outside with the community at large. (In 2002, the U.S. Supreme Court got involved in the national Chabad movement practice of lighting menorahs in public places made controversial by the constitutional mandate of separation of church and state, when it allowed a public display in Fountain Square, Cincinnati)

At the conclusion of the ceremony, a celebrant placed a large boom box atop his car parked in the adjoining driveway and broadcast festive Chanukah music as those gathered huddled against the cold, schmoozed, and enjoyed latkes (traditional potato pancakes) with hot cider.

For the next week, one additional electric candle will be lit every day in reenactment of the Chanukah story that oil found in the reclaimed Temple, sufficient for only one day, miraculously lasted eight days.  Electric current is coming courtesy of Yu Hsiang Garden restaurant next door.