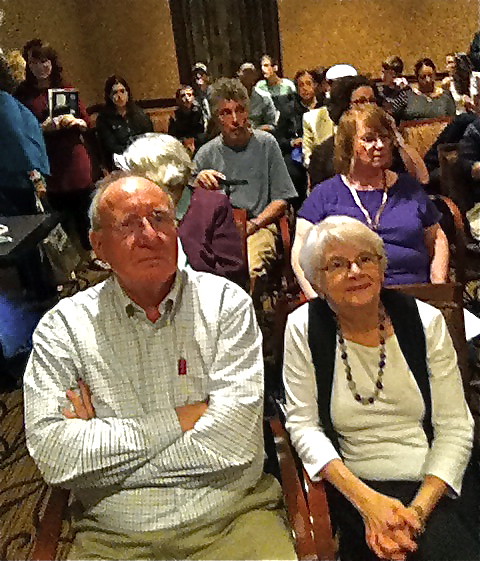 Above: Olin and Shirley Gentry

A video of the readings can be seen here.

A slideshow of photos of the festival can be seen here 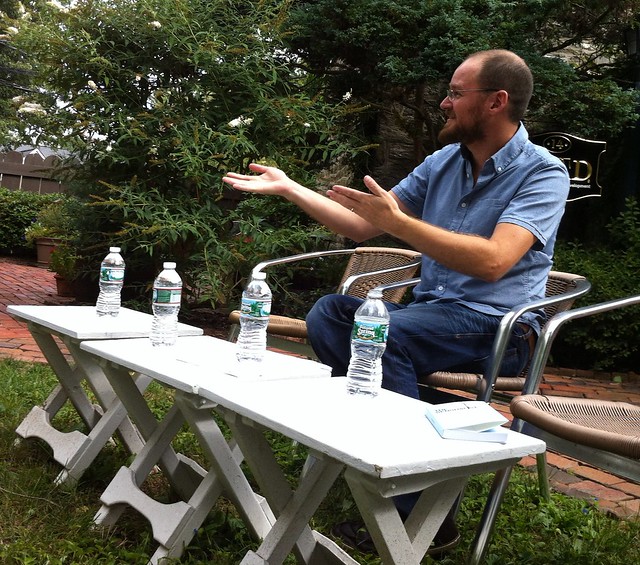 Daniel Torday, appearing at the Chestnut Hill Book Festival reads from his novel to be published by St Martin's Press in 2015. Forming part of the novel about the narrator's uncle , a Hungarian Jew who flew on bombing missions for the Royal Air Force during WW II is his recently published, award-winning novella, "The Sensualist." Watch video here. 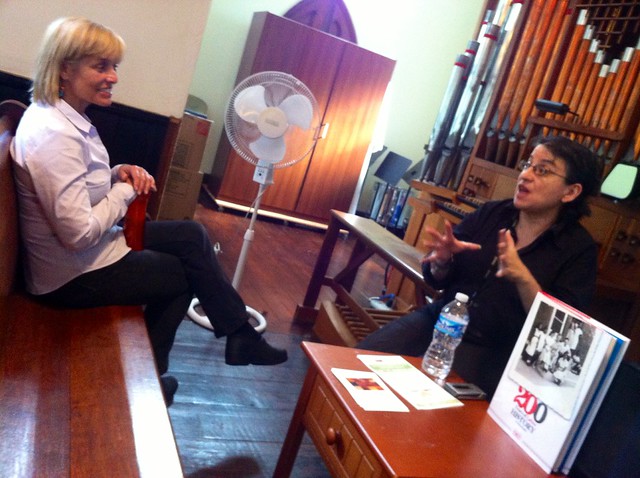 Charles Carr is a native Philadelphian. In 2007 Charles was The Mad Poets Review First Prize Winner for his poem “Waiting To Come North.” In 2009, Cradle Press of St. Louis published Charles's first book of poetry: paradise, pennsylvania. Charles hosts readings for the Moonstone Arts Center Poetry Series in Philadelphia. Charles next book is Haitian Mudpies and other Poems.

Maria Ceferatti is the music director of Acting Without Boundaries, a theatre group for performers with physical disabilities. A student of Creative Writing at Rosemont College, her work has been published in Philadelphia Stories, The Artistic Rebuttal Project, Just Jazz Guitar, and Apiary Magazine.

Kathryn Craft is the author of The Art of Falling, book club fiction due out from Sourcebooks in January 2014. She is a freelance developmental editor at Writing-Partner.com specializing in storytelling structure and writing craft. She serves on the board of the Philadelphia Writers Conference, serves as book club liaison for the Women's Fiction Writers Association, hosts writing retreats for women and workshops for creative writers, and speaks often about writing. She blogs at The Blood-Red Pencil and Writers in the Storm and is a proud member of the Philly Liars Club.

Blythe Davenport has found her muse in Philadelphia, the city past and present, abandoned and inhabited, real and imagined. The role that Philadelphia played in United States history has a mythological quality. It is the home of icons both hallowed and reviled. It is a wonderful city to write about and call home.

Alessandra Davy-Falconi, originally from Boston and Pittsburgh, is currently a student at Bryn Mawr College. She was a winner of the 2011-2012 Helen Creeley Poetry Contest, read her work at the 12th Annual Boston National Poetry Month Festival, and has a piece soon to be online in The Hive: Apiary Digital Edition. Her writing is influenced by anything and everything; she writes purely to tell stories in as many ways as possible.

Margaret DeAngelis is working on a novel set in Schuykill County. She has been awarded fellowships to the Jentel Artist Residency in Wyoming and the Vermont Studio Center and has attended the Sewanee Writers' Conference.

Jim Knipp is the author of over a dozen short stories and several novels, most of which are either mouldering away in a 30-year-old trapper keeper or patrolling around the recesses of his brain. He reached his forties and decided it was a good time for a mid-life crisis and now he’s trying to chase purple emus and rekindle his dreams of becoming a published (and paid) author. Jim’s short story, "No Fun Joe" has been published in the anthology Tall Tales and Short Stories from South Jersey. You can find many of Jim's random ramblings at www.knippknopp.com. Nathan Alling Long is a member of the fiction board for Philadelphia Stories. His work appears in over fifty journals and anthologies, including Tin House, Glimmer Train, Story Quarterly, The Sun, Crab Orchard Review, Salt Hill, and Indiana Review. He has received a Truman Capote Fellowship, a Mellon Foundation Fellowship, and a Pushcart nomination and is a seven-time finalist for the Glimmer Train Very Short Story Award. He lives in Philadelphia and teaches at Richard Stockton College of NJ.

Julia MacDonnell's second novel, Mimi Malloy At Last, will be published by Picador in April 2014. For the past four years, she's served as the essay editor of Philadelphia Stories. She is a professor of creative writing at Rowan University in Glassboro, NJ.

Trapeta B. Mayson is a poet, educator and licensed clinical social worker. She has received a 2002 Pew Fellowship in the Arts for poetry, two Pennsylvania Council on the Arts Grants and a 2007 Leeway Transformation Award. Trapeta is a Cave Canem and Callaloo Fellow and has completed residencies at schools, community agencies and artistic institutions. Trapeta’s recent publications include submissions in The American Poetry Review. Her second poetry collection, She Was Once Herself was released this year.

Jorie Rao is a second year Master of Arts in Writing Student at Rowan University. She grew up in blended families in Florida and New Jersey.

Debora Gossett Rivers is a Philadelphia native and the author of “The Working Mind of a Working Woman”. She completed her 2nd book of poetry titled “Running Into Myself Coming and Going, released in 2010. Created MALL SCIENCE proram for girls ages 9+ in 2008. She is a 1981 graduate of Simon Gratz High School and earned a Bachelor of Arts Degree in 1985 from the University of Pittsburgh. She has been an Income Maintenance Caseworker with the Department of Public Welfare in Philadelphia since 1988. She is married and has two children.

Hal Sirowitz was interviewed on The Writers Almanac Bookshelf. His latest book is Stray Cat Blues, published by Backwaters Press in Nebraska. He lives in Philadelphia with his wife, the writer Minter Krotzer, and his standard poodle, Bijou. He’s the former Poet Laureate of Queens, New York.

Alice Wootson attended Cheyney University and is a retired teacher. She is the award-winning author of ten romance novels and has conducted many writing workshops. She and is a board member of the Philadelphia Writers Conference and a member of the Mad Poets Society.