Stickers her bumper for science and causes 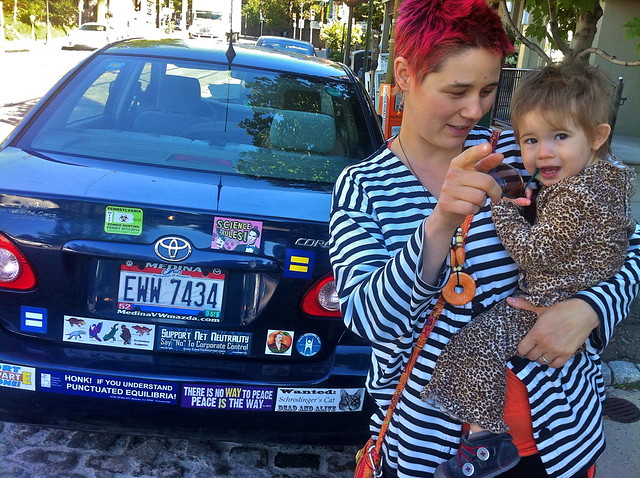 I was driving behind a car with interesting bumper stickers on Germantown Avenue in Chestnut Hill and when it pulled over to park, I pulled over, too, to ask the driver if she might extemporize on her stickers.

Martha Knox was with her four year old daughter, BB, waiting for the post office to open. She was then headed to the UCP (United Cerebral Palsy) Best Friends pre-school where BB is intentionally “reversed mainstreamed” with kids with disabilities.

Knox works professionally as a graphic designer and teacher and identifies strongly as a secular humanist. Her car’s rear bumper graphically and humorously expresses her beliefs. The 2013-2014 “Zombie Hunting Permit,” however, was placed by her husband.

“Honk! If you understand punctuated equilibria” was one sticker that particularly caught my attention. The theory in evolutionary biology, Knox explained, is that genetic changes happen rapidly in “short” periods of time, geologically speaking.

In these four videos, you can also see and hear Knox talk about “Nietzsche is Peachy,” “Evolution happens” both of which she designed, “There is no way to peace, peace is the way,” “Support Net Neutrality”and “Schrödinger’s Cat: Dead and Alive.”