Help find their doggie now - you did! 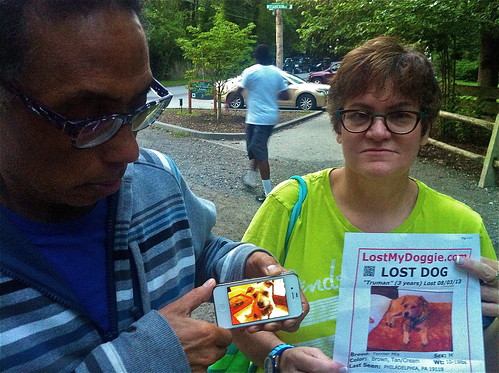 At the top of Forbidden Drive this Tuesday evening, Robin Gold and William Russell of Mount Airy were handing out fliers seeking help in locating their lost dog Truman. A small brownish-tan 3 year old terrier mix, Truman got away while being groomed at Bone Appetit in Chestnut Hill this past Saturday, August 3rd. He was last seen coming down Park Ave below Church in Road Lafayette Hill. Gold and Russell have been posted flyers, listed information on lostmydoggie.com (pet id 37452) and initiated robocalls to 6000 Chestnut Hill Area residents and, if Truman is not found by Thursday, will bring in a pet detective with search dogs that will track the terrier’s scent. Truman is likely tired, hungry and afraid. Please help find him. Email info@findmydoggie.com or call 215-991-6740 with any information.

Truman has been FOUND. 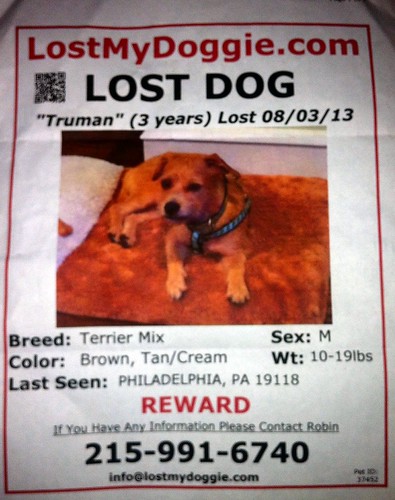 According to Gold, Truman was discovered Thursday August 8th, two days after the above interview, near Chestnut Hill Avenue by non-English speaking landscapers who had seen the Lost Dog flyers. They contacted their boss who called the telephone number on the flyer. Unfortunately, Truman had been hit by a car and his tail severed at the spine. He was treated and is recovering at home. It appears the injury may permanently affect his bladder and bowel control but not his ability to walk. Gold reports his spirit is good and is just happy to have him home. In recent days, large laminated Lost Dog posters attached to telephone posts have been visible along Germantown Avenue and Pike offering a $2000 reward. Gold reports that the reward has been paid to the landscapers who also assisted in jumping a fence into a private yard to retrieve the small terrier: "They earned it" 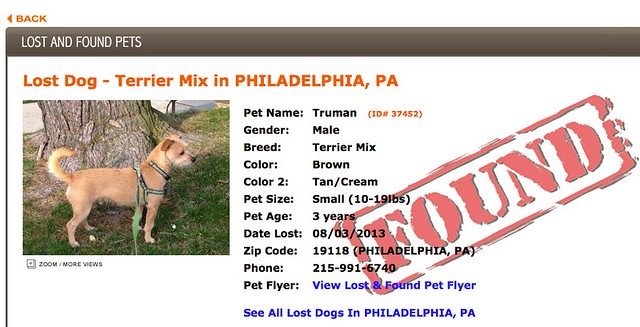