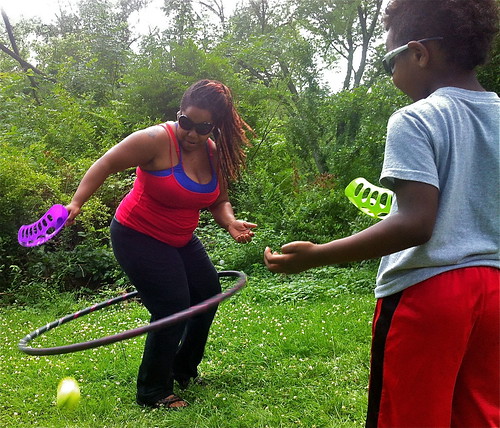 Vanessa Hazzard-Tillman teaches hula hooping in East Falls, entertains at parties and at the Public Eye: Artists Animals July 4th Vegan Potluck picnic in Harper’s Meadow in Chestnut Hill, she showed off some of her stuff.  A former clown and currently involved with the vibrant Philadelphia circus arts community, Hazzard-Tillman is also a massage therapist and yoga instructor.

She especially likes to combine yoga and hooping. While being distracted by her young son, Phoenix, she nevertheless managed to twirl a hoop smoothly around one rotating foot in the air while switching from one yoga pose lying on the ground on her side to an inverted pose.

Hazzard-Tillman often studies online videos and is now training to do fire hooping.

The circus community likes to give back, she says, introducing one of her ambitions. In addition to being President of the United States and a rock star according to her online profile, she hopes to successfully audition with a troupe that instructs youngsters in circus arts in one of the refugee camps in northern Thailand. The two-month program in which the children learn juggling, clowning, poi spinning, silks and hooping culminates with the refugee children mounting their own performance.

Hazzard-Tillman makes her own hoops out of black polyethylene tubing, covers them fun tape like Batman or Hello Kitty themed patterns and also sells them online through Amazon and her own website nirvanalandessentials.com where she also sells jewelry, gemstones and African soap.

Her business card also lists her profession as “Reiki Master/Teacher.” Had my interview with her continued further, I definitely would have asked how she manages to juggle it all!