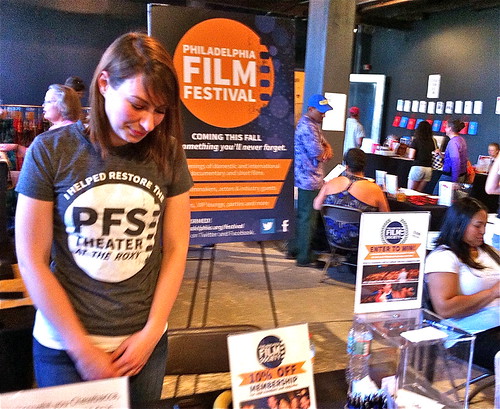 The Philadelphia Film Society is renovating the venerable Roxy Theater on Sansom Street downtown, installing new seats and screens and converting to a digital projection system. Marketing Director Katie Powell is excited that the Roxy could become a cultural, film epicenter for the year-round showing of art house, independent and foreign films. In partnership with the Philadelphia Film Office, the Roxy will mount “Filmadelphia,” a once-a-month showing of a film created and produced in Philadelphia. At her booth at the Inliquid “Art for the Cash Poor” arts show at the Crane Building, Powell was encouraging visitors to enter a raffle for the chance to win two free tickets to PFS’s “biggest, baddest” event, opening night at the Society’s premier project, the fall Philadelphia Film Festival. watch video interview here.