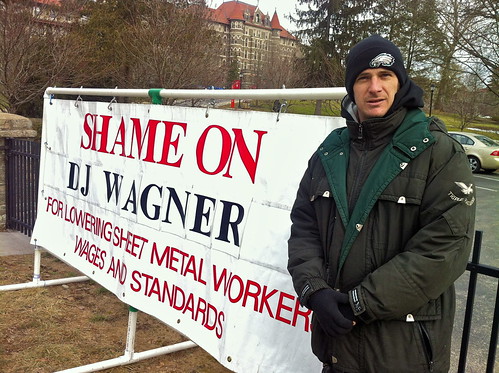 The Sheet Metal Workers Union has been protesting Chestnut Hill College’s use of non-union, Delaware-based contractor DJ Wagner. Eddie Guinan, a sheet metal worker who is manning the picket this day, says Chestnut Hill Hospital, down the street used union workers [for its recent renovations] and that Chestnut Hill College should do the same. The police were called one time and he thinks it was the college’s way of letting the union know that they don’t like the picket.

Guinan believes that a college that is charging students $41,000 a year naturally wants the best educated teachers and should also want the best educated- that is, union- workers. Union standards and wages, he says, protect his ability to pay his bills and take care of his family. He contrasts that with non-union workers who may only get only 32 hours, not 40 hours of work a week and without benefits. Guinan works in heating, ventilation and a variety of specialty projects but work has been difficult to find in recent years. He credits the Republicans with doing their best job in the last four years of crushing the unions.

NOTE: A comment has been received that the non-union work is being done for the Sisters of Saint Joseph (who run Chestnut Hill College) at their convent.