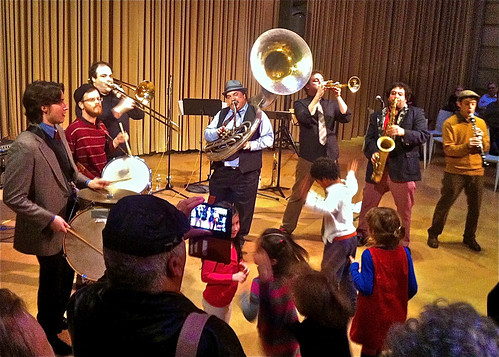 The West Philadelphia Orchestra entertained an enthusiastic and dancing crowd of youngsters and oldsters for a Chanukah celebration at the Philadelphia Museum of Art on a December Friday night as part of the museum’s “Art After 5” program. The West Philadelphia Klezmer Orchestra, an offshoot of the band, played primarily Klezmer, East European celebration music,  for the occasion. What began on a West Philadelphia porch in 2006 as a mostly string ensemble playing Macedonian tunes, Romanian ballads and Jewish folk songs has evolved over the years into brass instrument Balkan band  playing Serbian and Gypsy melodies and its own versions of these genres. Watch video here.