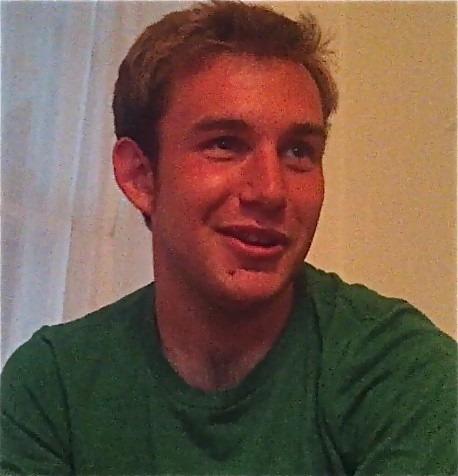 I went to a party in West Virginia and it was a guy’s retirement party. And he had this t-shirt on and it said “Glasgow, Scotland” because he was in the military, he was in the Marines, or Navy that one, one of three. And we’re having a few drinks and someone says, you should go up to the microphone, it’s Karaoke and say you’re Kaley’s son from Scotland. I said, “I can’t do that.” He says, “Come on.” So eventually we had a whip around. And the whip around was up to sixty dollars and being Scotch, you can’t turn down that money. So I went up to the microphone. I was like, “It’s finally great to meet my Dad bringing me here to meet at his retirement party.” Half the party knew I was doing it but the other half didn’t. So it was like, “Chhhh!”  But it turned out the guy knew, he found out this was going to happen. He stood up, come up and just hugged us for a good five minutes. I was standing there, I didn’t know he knew.  So I was kind of thinking this is great, he thinks, this guy doesn’t know. And then his mother comes from nowhere so gives us a hug. “It’s great to meet you now.” “Oh, you too.” And eventually I found out they knew. But later on I’m talking to this girl at the party and getting a bit closer to her. It’s going all right. A guy comes up to me, “You all know she’s your cousin.” And I’m like, yeah. “It’s alright now, you’re in West Virginia.” I thought it was brilliant"

As related by a UK Elite soccer coach who, for this story, prefers to be identified as "John Deere."