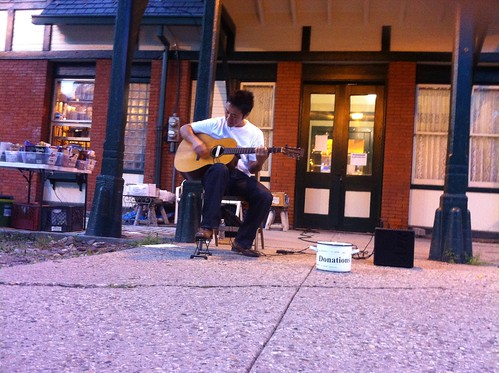 WHAT WAS THAT ABOUT?  It’s like appreciation for this country. [referring to another song he played but not appearing in this video] My intuition, my intuitionish  expression. I cannot explain well so that’s why I play. IS SOME OF YOUR MUSIC JAPANESE INSPIRED? Yes. Like the third song I played, “Takibi,” bonfire, it’s inspiration from my grandparents. HOW DID THEY INSPIRE YOU? My childhood. When I recall my childhood. That scenery made me write that song. The bonfire and the smoke going up in the sky. YOU GREW UP IN KYOTO? I’m from Kyoto, a very traditional city. But somehow I picked up a five-string banjo because my Dad was a crazy guy. And he brought me a banjo one day and asked me to play it. A new instrument for me. I didn’t know how to do it so I was just playing around with it. Yeah, that’s the story. 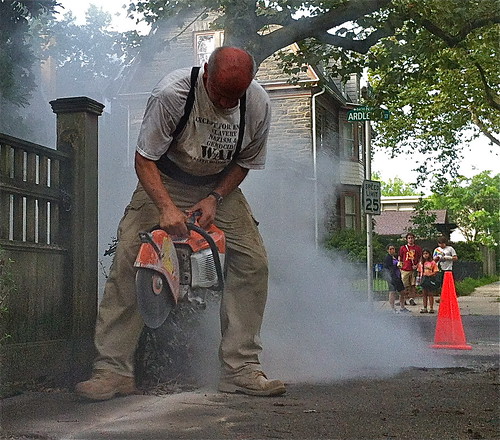 In Chestnut Hill, Philadelphia, where many sidewalks become buckled or broken because of large tree roots , Bill Hackett of Husky Masonry, Perkiomenville, PA sawcuts a seam in old sidewalk blocks that he is preparing to replace with "3/4 inch two bit" concrete aggregate. This modern blend is preferable to mixtures with round stones or cinders used in earlier times because they tended to break up more easily. To give the newly laid concrete an aged look so it blends in with the older adjoining sidewalk blocks, he sprinkles powdered dirt, which he has taken the extra measure of sifting more finely, onto the newly poured concrete. The biggest challenge of the work, Hackett jokes, is not getting hit by cars. 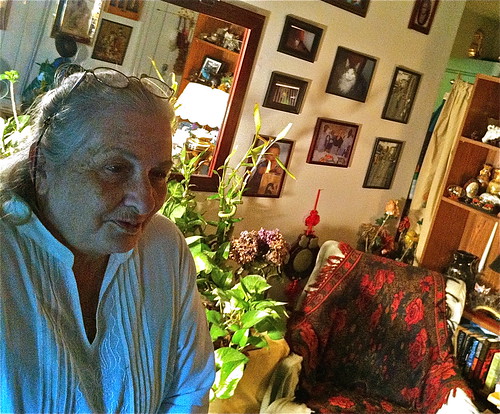