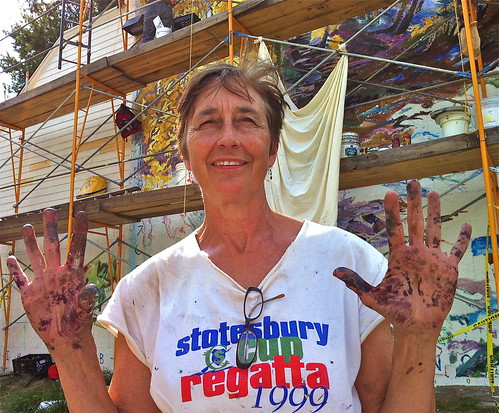 I ask mural artist Ann Norththrup to take a break and hold up her paint-spattered hands. We chat about the watercolor she painted of the Wissahickon Park that she and her crew of helpers are now installing on the wall of Bredenbeck's Bakery, the first mural in Chestnut Hill, Northwest Philadelphia. Watch video here.

>> BR: Have you been up there long today?

>> AN: Since eleven o’clock, we can’t really tolerate the sun in the early morning…so we come about eleven and try to stay ‘til seven or eight.

>> AN: Well, it’s the first mural in Chestnut Hill so that’s pretty exciting. And I can show you the design.   You can see on the wall there’s a grid.  So here’s the grid on the design. And basically it’s a  Wissahickon landscape that I painted actually on the spot.  And it’s kind of surrounded by architectural detail to try to fool the eye into thinking that this is really a window and this is really a slate mansard roof such as is on front of the bakery. And then this little shed at the back. You see, I’m trying to  pretend  like it has a slanted roof. Really it’s just a lean-to. It just goes straight there. And we also added a couple windows at the request of the building owner. So what it is - she’s going to plant a garden down here in this little triangular space. .. And then I’m going to make that garden continuous with the garden in the mural so a cultivated garden here that goes off into a wild garden back there.  It’s supposed to be kind of like a little magic square, you know, where it’s framed by these architectural details that sort of unite it with its Chestnut Hill neighborhood. But you’re really going back into a deep landscape space. … The original is a watercolor. I have a print of it here  if you’d like to see it.

>> AN: Oh,  it might be up in the scaffolding. I think it is actually.

>> BR:  And how many helpers do you have with the project?

>> AN: I have two interns and one assistant so far and I probably could use another assistant ‘cause they want it done for the October  festival in Chestnut Hill..

>> AN: You know it’s really hard. I’ve had a lot of actually community help. And It’s been really fun to paint with people but it’s  hard to get people to understand my vision for it, you know,  and to paint in my style even though they already mostly know what they’re doing, you know?