Losing the sense of smell

A young woman who realized in college that, without a doubt she wanted to become a chef, grabbed the offer to start as the dishwasher in a famous Boston restaurant and she loved it, covered in butter, chicken fat, sweat. One morning, on a morning jog before work, she was hit by a car and among other bad injuries, had shattered her skull. Two weeks later, making a recovery at her father's house, she made a bad discovery - her sense of smell was gone. Heat was all she sensed of the cinammon-laced apple crisp, a favorite dish, when it was just drawn from the oven and held under her nose.

Birnbaum went on to study the sense of smell and her experiences with its loss(a condition called "anosmia") and wrote about in her 2011 book,"Season to Taste." Along her journey she spent much time with the olfactory scientists the Monell Chemical Senses Center with whom she presented "Forgotten Sense: Exploring a World Without Smell" as part of the Philadlephia Science Festival.

Also attending the event is a doctoral student in information sciences at Drexel University, (shown below) who speaks about her own experience with anosmia. 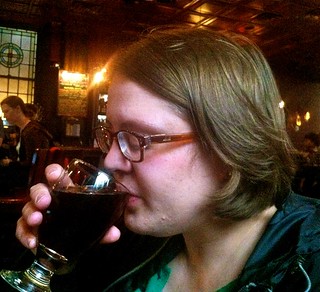 At the National Mechanics Bar and Restaurant in Old City, Philadelphia.