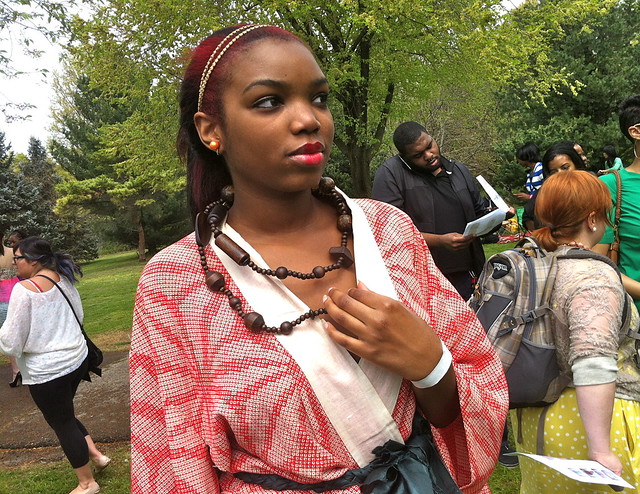 “Students from the Art Institute designed outfits for this show. It’s a Harajuku style so we have the more fun, colorful and bright style. Then we go into formal wear which is what I’m wearing. Then it’ll go into a more gothic [unintelligible]” (Pointing), “Hers is a much more of a fun style… hers is a really bright Harajuku, and a fun – really.” Heather Chow “It was made from a Kimono that I ripped apart and turned into a skirt and a top. So kind of re-inventing itself into a young Japanese look for now… This is one of my friend’s designs. Her name is Latoya. She turned this kimono into a wrap dress." Monica Monique, shown above. 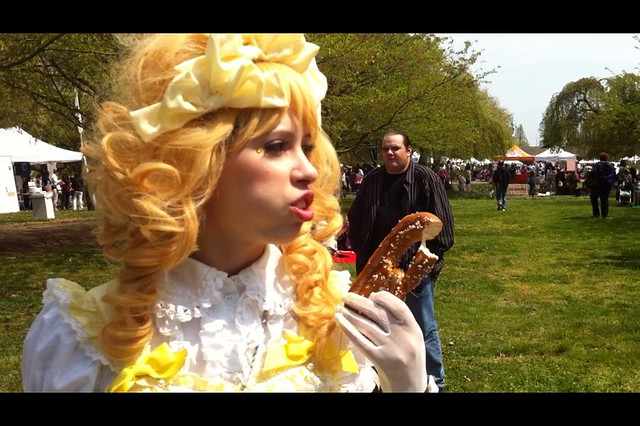 WHAT’S JAPANESEY ABOUT YOUR OUTFIT? It’s from Japan.  It’s a fashion style called Lolita. L-O-L-I-T-A.  AND WHAT’S IT CHARACTERIZED BY?  It’s pretty much female modesty.  Typically you’re going to see poofy skirts, dresses and over-the-knee socks. Stuff like that. This is Japanese fashion style. We’re a Japanese fashion group. DO YOU STUDY FASHION? I don’t but several girls do. I just like it. AND WHAT ABOUT YOUR OUTFIT? DID SOMEONE MAKE IT FOR YOU OR DID YOU DESIGN IT? Oh no. Except for two of the girls, we all purchased our outfit from Japan. Or from China. There’s some Chinese companies getting into it now.[talking about her soft pretzel] It’s good. AND IS THAT A JAPANESE TRADITION TOO? No it is not. It’s  a Philly tradition. Except I don’t have cheese or mustard. YOU’RE MIXING YOUR TRADITIONS HERE. I am. It’s a yummy tradition.