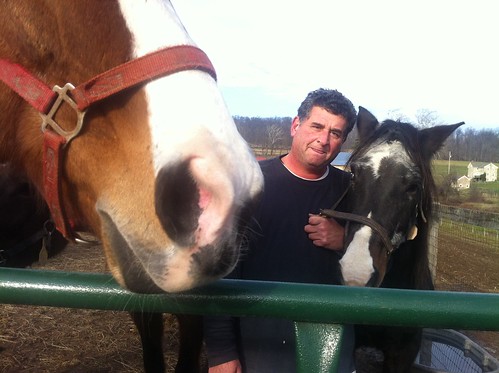 Gregory Marincola volunteers at Ryerss Farm, a “retirement” community for old and formerly abused horses, located on nearly 400 acres of land in Chester County. http://www.ryerss.com There, Marincola visits with the first horse of his wife, now deceased, a half Tennessee Walker, half Paint who was called to Ryerss from her place on the waiting list when she was 31 years old.

I’d like to introduce you to my three horses that I have up here at Ryerss. I’ll show you a picture.  [Pointing to photos on wall] This is my wife, Andrea, who has passed away, and this is our horse, “April,” when she was a baby. She’s like two years old there. And to the right we have Vicki, who has passed away, and our little pony Mindy, who has also moved to the other side. And, again, this is April, a bit older now; she’s still living, she’s still with me. This is their wall of fame here at Ryerss and you can see it’s all the horses that are here now, who have been through here and passed on and some of their owners. This is open to the public. They can come in here and look at the horses and get an idea what’s going on….This is Arian’s April’s Dawn, my wife’s first horse and we got her when she was two years old. We kept her at home until she reached the age of  thirty-one. DID YOUR WIFE RIDE HER? Yeah… She’s strictly a pleasure horse and she’s half Tennessee Walker and a half Paint. We had put our horses on a waiting list here at Ryerss and a year after my wife passed away, I got the letter, it was time for them to come home. So this is where she lives now. Gregory Marincola, with April, at Ryerss Farm for Aged Equines, South Coventry Township, Chester County, Pa. 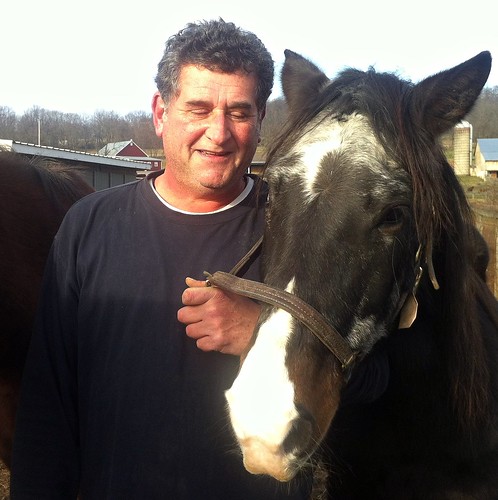