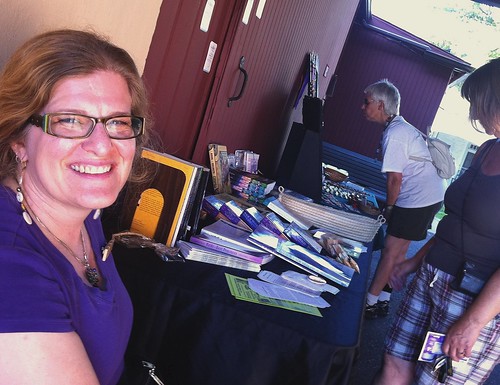 We have a rule in our household that if there's a book that's been turned into a movie, you have to read the book first- the Harry Potter movies... there's been a lot of kids books that they've taken and changed around and made them into movies and it's been pretty funny. Because they change them! But I always insist that my kids read the books first. Of course we have to do that ourselves, mind our own rules. So my husband and I had to read "The Lord of the Rings" when that coming out as a movie a while back. We had to read them again. I had read them in high school It was actually work!

Being at this book festival, people are walking by and they're talking about books which is so much fun. And there were some women here earlier at my table and they were talking about kids books that were turned into movies, "The Hunger Games" and how excited they are about that. And we started talking about the books that we love, as adults but they also might be kids books. And then we started talking about the books that are narrated, that are read on tape or CD. And one of the leader-readers, it's so obvious, is Barack Obama, You know he got a grammy award for reading his own book aloud?.. That poor guy has such a job!