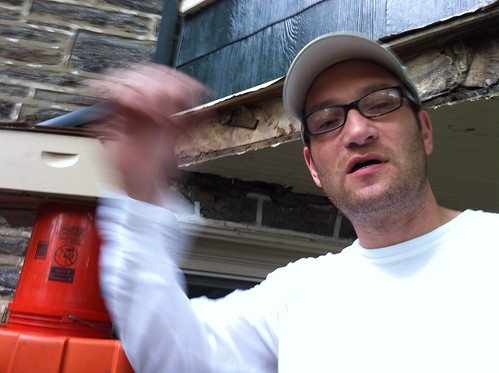 It’s really great. They took the fascia off and the amazing thing to me is as they’re crow barring, and this and that , the bees completely ignored them. So they got everything opened up and there was this cavity with honeycomb in it. I have some great pictures, absolutely incredible. They take the honeycomb out. They put them in frames. The frames went in a bee box very similar to this one. And they actually vacuum the bees Once they get all the combs in the box, then the bees go back into the box and you’re done. The reason this is still here is for all the bees that are coming back from being out foraging. I think they have the queen in this one so when they come back they go into this box and not into the house. THESE ARE HONEYBEES, RIGHT? These are honeybees. And I got some honey out of it. So they take all the honeycomb because the bees need the honey but some of it won’t fit into the frames and there’s little pieces left over so I have some honey. LET’S GO SEE. I’ll show it to you. Here’s one- it’s totally clean. You have to try it. Break off a little piece. This one’s not as clean, do you see the white things there and there? They’re pupa or larvae. Those are the bees that are coming out of the thing and growing. AND THE BEEKEEPER WILL TAKE THE HIVE THAT’S NOW RELOCATED INTO BOX AND WHAT? Now they have another hive. If you’re a beekeeper and you have thirty hives, now you have thirty-one. Todd Breslow. Chestnut Hill. Watch video here. 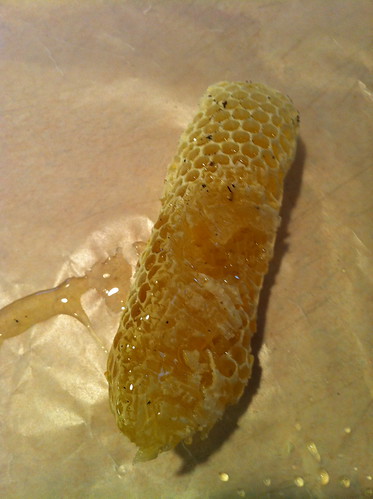 Below is a picture taken by Todd Breslow of his beekeepers vaccuming the hive they removed from his house and below that, the hive between studs of the second floor overhang. 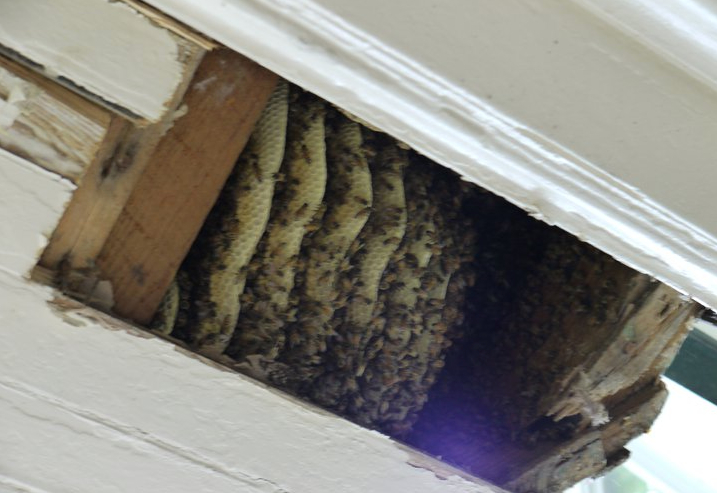