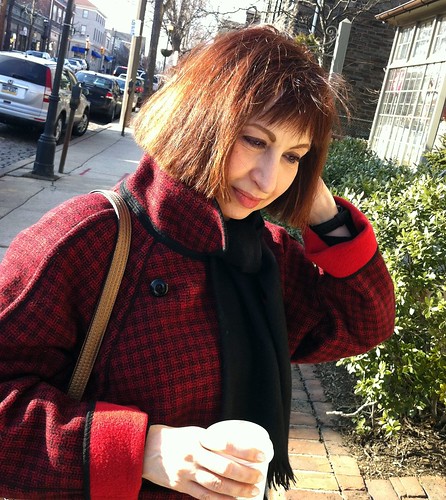 Local actress Pierlisa Chiodo-Steo, who just completed a run at Stagecrafters Theater as Amanda in Noel Coward's "Private Lives" is taking a break before doing some readings in March. Her motivation for acting is to move audiences, make them laugh or cry. She can next be not seen watching the Academy Awards in front of her TV. Watch video here.

Flyers hockey monster on the run in Chestnut Hill 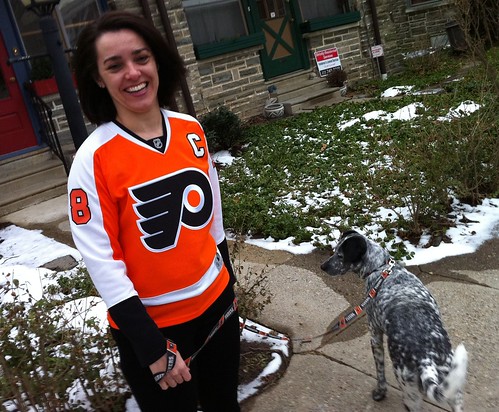 Misty was out for a run on Highland Avenue with her owner, Julie Byrne, who was about to rush off to the Flyers - Islanders ice hockey game. An American friend introduced the Britishwoman to ice hockey some time ago and she's now a Flyers "monster." Despite sporting a bright orange Mike Richards jersey, Byrnes is a  Danny Briere fan. The Flyers won in overtime 4 to 3. Chestnut Hill, Philadelphia. 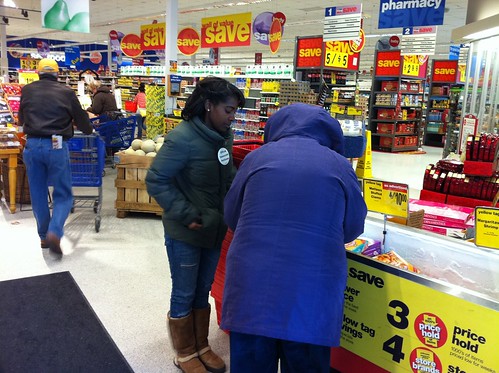 A young woman, wearing a large white button reading "Official Democratic  Petitioner" was one of three individuals collecting signatures just inside the Chestnut Hill Pathmark on a petition for Donna Gentile O'Donnell who is running in the Democratic primary for Philadelphia's 8th District City Council Seat. [Yours truly ran and lost as a Green in the general election for this post in the 2007 general election] The young woman solicited a signature from a shopper whom she had just misinformed that O'Donnell is running for Commissioner. Her two companions appeared equally unacquainted and uninformed about O'Donnell or her platform. Nor was there any campaign literature in sight.

THIS IS FOR WHO?

AND WHAT IS SHE RUNNING FOR?

IT’S A PRETTY GOOD SPOT YOU GOT HERE RIGHT INSIDE THE STORE.

Well, we’re just trying to be creative, that’s all

AND WHAT’S HER POSITION ON THE ISSUES?

You have to speak to her about that. I won’t speak for her.

WELL WHY ARE YOU SUPPORTING HER?

I think she’s a good candidate.

HOW LONG HAVE YOU KNOWN HER?

Let me finish my job.

[Signature Collector 2]…. She’s going to be one of the electors for City Commissioner….

CAN YOU TELL ME SOMETHING ABOUT HER?

[Signature Collector Jay Scott] Well, from what I’ve been told by my office, she’s been a city official for about 20 years and she seems like a fair person. And we feel as though the Democratic Party couldn’t be represented any better.

IS SHE OUT HERE TODAY?

No we came up here on our own because we’re trying to solicit and we don’t know the area good but we figure because the supermarket is where people shop on Saturdays and department stores, we’d try to affiliate that with that information.

DOES SHE  PAY WELL FOR COLLECTING SIGNATURES?

I couldn’t go in for  answers because I’m not getting paid but so much but it’s OK. 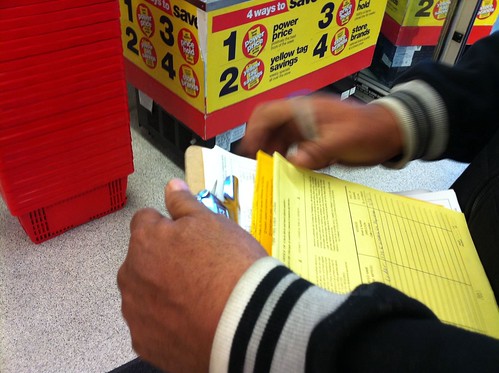 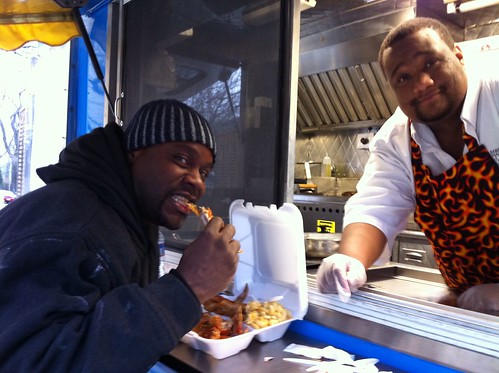 Rob Lambert takes his food truck around to a couple locations in Germantown and Mount Airy and specializes in barbecue, Maryland style. Rich Sanders is a satisfied customer seen here enjoying chicken and macaroni. 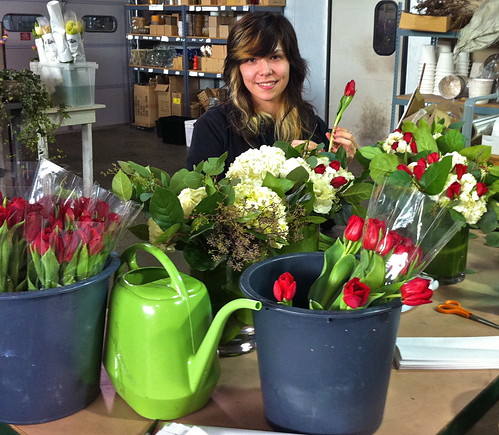 In the 2004 movie, “Maria Full of Grace,” a pregnant young woman trades the harsh conditions of a flower packing operation in Colombia to come to the United States with a friend as a “drug mule.” It doesn't turn out well.

The flower export business is big business. Large, drab greenhouses, like those in Ecuador where “Maria” was filmed, can stretch for miles. From my bus window, I knew the eerily transformed landscape would not be on any picture postcard I would be sending home to the U.S.

Beauty has its cost to both the environment and people, however, according to “The Secrets Behind Your Flowers,” a February 2011 Smithsonian Magazine report. Because it may take three gallons of water to grow just one rose bloom, groundwater supplies become depleted.  The low-paying work is tedious and straining. In traditional growing operations, workers are exposed to the dangerous pesticides and fungicides that keep insects from taking the slightest nibble from an otherwise picture-perfect flower.

Public outcry in recent years has led to the introduction of fair trade practices.  Nicole Serfass, flower buyer at Robertson’s Flowers greenhouses in Wyndmoor, showed off the Veriflora label on the roses they import from South America.  Veriflora is one of a handful of certifying organizations that try to ensure that their growers are using sustainable agricultural methods and providing equitable, healthy conditions for their workers.

At Robertson’s showcase Chestnut Hill store, Sandy Robertson says they source their flowers locally  from New Jersey,  domestically from Florida when they can and even sees growing customer interest in organically or sustainably grown flowers. Serfass has been asking their growers about organic but believes it’s not yet economically worth it for them to invest the years required for organic certification.

“Aren’t they gorgeous?” Donna Beardell of  Chestnut Hill asks,  exiting Robertson’s with a brilliant bunch of pink tinged roses, destined for her nieces competing in a gymnastics meet. On Valentines Day, she’s hoping she’ll be the recipient. 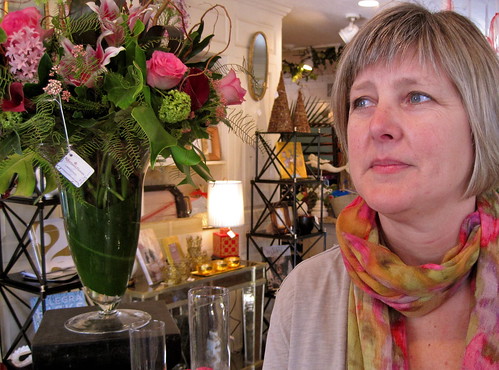 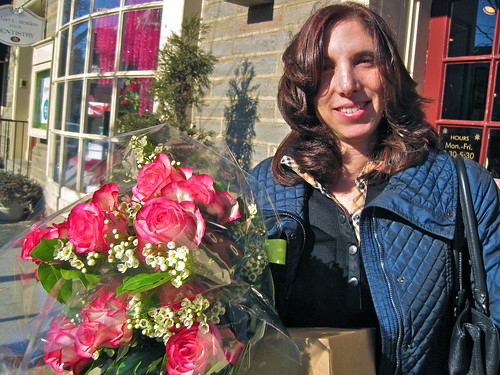 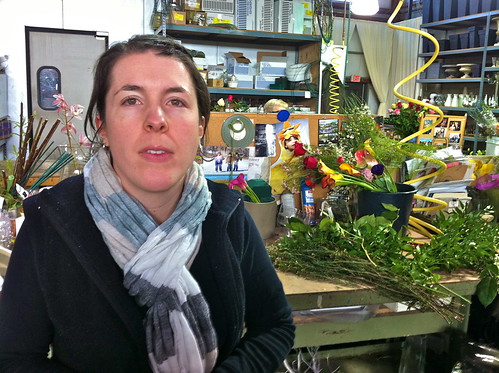 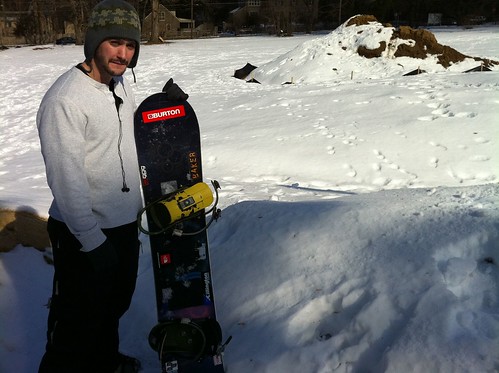 Andy Thorne of Chestnut Hill took advantage of the ample snow and a pile of stones at a construction site at the Allens Lane Art Center fields in Mount Airy to set up a snowboard run with a friend who built and supplied the rail.

Here he is snowboarding. 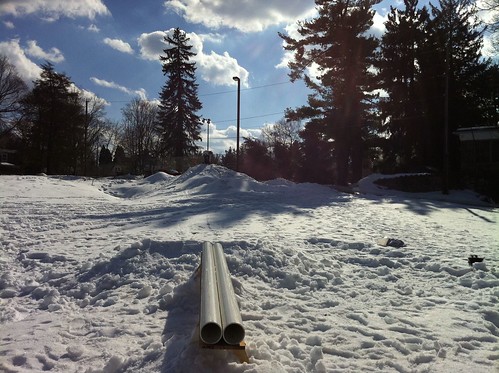 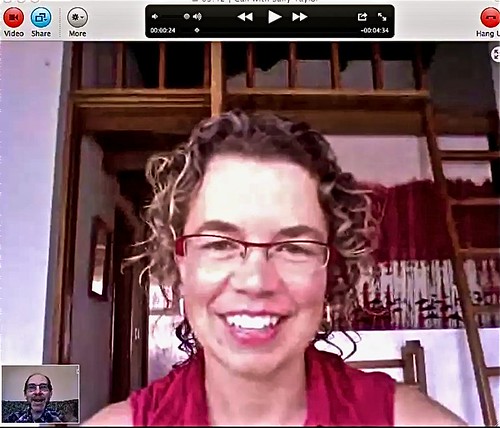 Sally Taylor, a university reference librarian from Vancouver, Canada is finishing up an 8-month stint as a volunteer librarian at the Charles Darwin Research Station in the Galapagos. She spoke via Skype from her home in the town of Puerto Ayora on Isla Santa Cruz about her work which includes finding materials for staff and volunteers and emptying the dehumidifier. She’s also had the opportunity to do touristy things like a cruise to see flora and the albatrosses nesting on the island of Española. The station is advertising for a volunteer librarian to succeed her. Sally blogs about her adventures on the equator at http://blogs.ubc.ca/galapagos/ 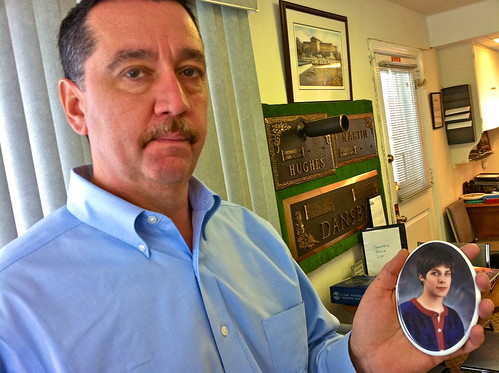 Gallagher Memorials has been at the corner of Ivy Hill Road and Cheltenham Avenue, across from Holy Sepulcher Cemetery for more than 100 years. In that time, the use of marble has given way to using granite, imported from as far away as India or China or quarried as close as French Creek, Pennsylvania. Granite lasts much longer, “forever,” according to Manager Larry Conroy. Computer assisted technology now allows personalized engraving of scenes or depiction of hobbies dear to the deceased or even a carving of the departed’s own visage. 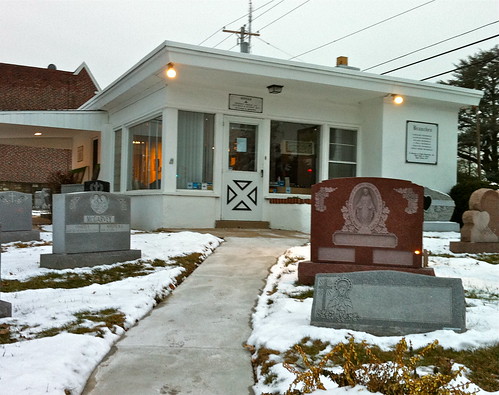 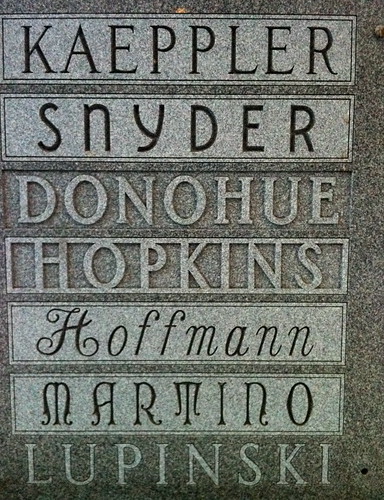 Israeli traded sand for snow, hopeful for democracy in Egypt 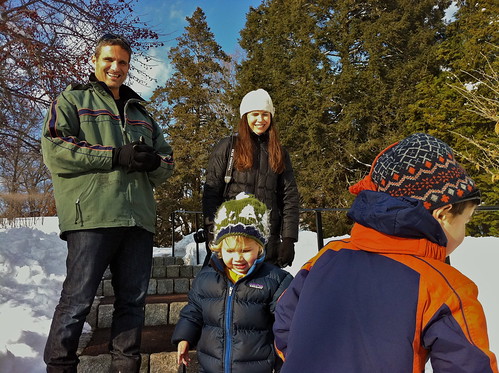 Along the cleared paths of the Morris Arboretum, visitors enjoy a snowy winter wonderland. Jacob and Sarah Pinto come frequently to the arboretum with their sons Shachar (right) and Yishai, to  experience the trees or an outdoor concert.

Jacob, a native Israeli, says of his family's relocation here two years ago that they’ve traded sand for snow. He says it does snow in Israel but only in the Golan Heights and only for a couple of weeks each year.

When asked about the situation in Egypt, he expressed hope that the country, Israel's neighbor and enemy-turned friend, will have a real democracy.

From township manager to candle king 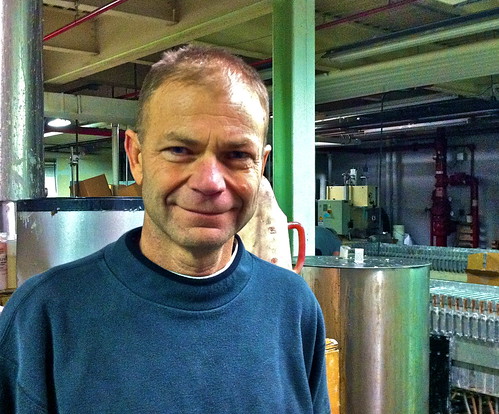 Bill Binder’s father loved the milk box, candle-making project his son was doing some 40 years ago with his cub scout pack so much so that what began as a family hobby grew into a substantial family owned business, Candlewic in Doylestown.  After college and many years as a professional township manager in New Jersey, Bill joined the business which caters to the wholesale candle trade but turns no small, individual customer away either. More recently, the company has branched out into soap products.