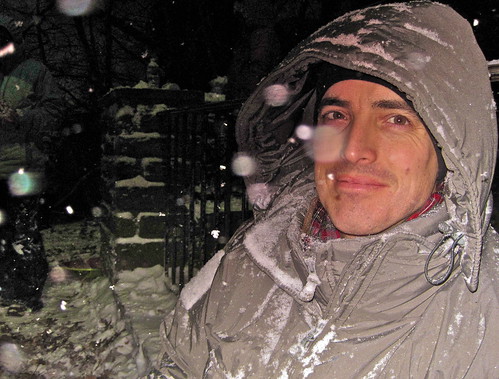 "Tracker" Dan is a reservist with the United States Navy SEALS and has served on active duty in Iraq where he had a months-long assignment guarding former Iraqi Prime Minister Ayad Allawi. Dan, who is part Cherokee, teaches nature and survival skills that he was first introduced to as a child by his parents. He can be reached at http://www.trackerdan.com/

“SEAL” stands for sea, air and land. So we train for all of our ocean stuff which is diving with re-breathers, where there’s no bubbles. So being able to insert to either get somebody out or do reconnaissance that kind of thing. Or to disable a ship in a foreign port which we’re trying to keep from escaping to somewhere else. There’s the small inflatable boat stuff for inserting over the beach. And of course we have all our air ops, free-fall, parachuting into the ocean, getting into a boat and taking that to an objective. Getting hostages out of a situation or doing reconnaissance. Or for boarding ships and taking them over and turning them around if there’s an embargo or something like that. YOU TEACH SURVIVAL SKILLS, TOO? That’s something I did before I went into the military. I teach survival skills to the SEAL teams as a civilian and I did it when I was activated as a reservist. I taught them jungle survival down in South America Then of course we have our land training too which is all our marksmanship, patrolling and room clearing.- being able to take down a house safely and get hostages out or clearing it of bad guys or going in and capturing bad guys. That involves sniper work and communications, a lot of radio type stuff. It’s not always this way but the army generally has the highest ranking officers so they are in charge of SOCOM which is the joint operations between all the U.S. military. They’re basically the administrators. They say you guys can do this job; you guys can do that job. When we’re over in war areas, the Army’s in control, so it’s very important for us to be good at comms. Because they’ll use us for reconnaissance and stuff like that. They like to take the good jobs because they’re in control. They’ll give us everything they don’t want to do. We have to very good on the radios to let them know where we’re at, where the bad guys are at, and what’s going on.