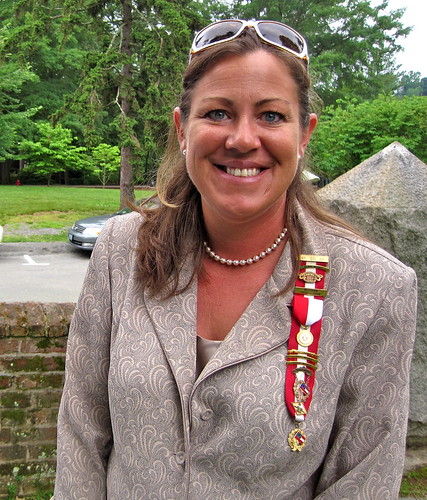 AS A YANKEE- WE GENERALLY ASSOCIATE THE CONFEDERACY WITH SLAVERY. IT’S HARD TO OVERCOME THAT. “I understand that. Yes, slavery was a very hot topic back then you could say, even twenty years prior to that, even, especially in the Kansas-Missouri border states, the abolitionists and all that went on out there. It was fought more- states’ rights started everything, I feel. The South wanted to do things their way and the North wanted to control that and that’s what fueled the fire for South Carolina to secede from the Union to begin with. HOW DO YOU FEEL ABOUT BEING IN THE UNION TODAY? “I love it.” THINGS WORKED OUT FOR THE BEST? “Who knows what it would be like? Nobody can say it would be better or worse but it’s still a great country.” Kimberly Mauch, president of the Turner Ashby chapter, No. 184, United Daughters of the Confederacy of Winchester Virginia, is the blood descendant of four men who served, and some of whom perished, in the Confederate forces in Missouri: her great-great-great grandfather Blair McGee and his brothers Daniel and Hugh, and her great-great grandfather W.C. Jarret. The pins on the ribbon she wears bear their names. She began to take a particular interest in her civil wartime heritage when she was eight years old. To be eligible to join the Daughters, she needed to muster evidence of her blood connection and of her ancestors’ service. She was able to do this partly through the narrative of one of her forbears' slaves, collected during the 1930s by the Federal Writers Project, part of the Works Progress Administration. Confederate Memorial Ceremony, University of Virginia Confederate Cemetery, Charlottesville, Virginia.