HOME VIDEOS PHOTOS ABOUT
I put money in the meter and nothing happened!?!
Few Phillies Fans in Kalamazoo 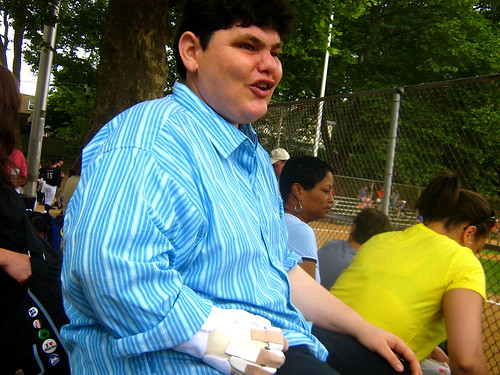 "Thank you, family in America, Charlie Affels and thank you Elizabeth Affel and thank you for the surgery Doctor A. Lee Osterman and thank you, people America." Marwan, a 27 year old Iraqi man, the subject of Close Up in the January 24, 2008 issue of the Local when he was first in the U.S. for reconstructive surgery on his arm that was badly injured from a car bomb that killed nine of his colleagues. He wanted to publicly thank his host family, the people who brought him here and his doctor in the Local on this return visit for additional surgery and therapy. He is seen here cheering at the Chestnut Hill Youth Sports Club major league baseball championship game. With the score tied at 1 to 1 going in to the bottom of the fifth of six innings, the Pirates emerged with a 5 to 1 victory over the Dodgers.

Posted at 11:05 AM in Current Affairs, INTERNATIONAL, MEDICINE | Permalink