I put money in the meter and nothing happened!?! 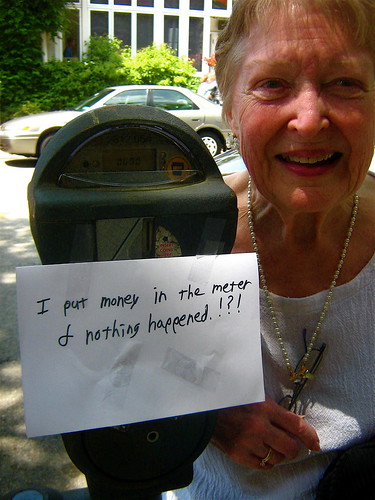 "I put in 50 cents and the second quarter didn’t move it at all. I had 43 minutes. So when I went in the restaurant I told the waiter and asked him about it. Because I thought putting in the second quarter I’d at least get an hour. And he said I’ll go out and check on it for you if you tell me when. He said they’re very careful in Chestnut Hill but you know you can park free in the lot. We didn’t know that, haven’t been here in a year. So then I came out when the time was up and saw that he put the note on the front of my car with two quarters. I only gave him one quarter. So the meter man seeing me come to put the note on the meter came over to me and said you know you should always put the note on the meter and not on the car. And I said but that’s not my note, it was the waiter who thought to put the note there and added his own quarter. Now I’ll go back and give the waiter back his quarter. And I also reported to the waiter what the meter man had told me." DID YOU HAVE A GOOD LUNCH? "Yes, a delicious lunch and we’ll come here again because it’s the halfway point between [downtown] Philadelphia and Gwynedd." Polly Dunn of Foulkeways in Gwynedd,Pa. across the street from Cake. Click here to see video interview.